Home
Cats
Can Cats Drink Beer? The Dangers of Alcohol to Felines

Can cats drink beer? While this is a crazy question, I think it begs for a comprehensive answer. No, cats can’t nor should drink beer since alcohol isn’t part of the feline diet. While you may want to treat your cat for the simple pleasure of having a sip, beer isn’t the way to go. Your cat may experience alcohol poisoning and other adverse effects of alcohol ingestion.

Cats should never ingest any drink containing alcohol. Aside from the toxic ingredients, beer contains alcohol that will spell trouble for your pet.

According to vets, alcohol poisoning is rare in cats because felines don’t find the smell of beer appealing. Still, it doesn’t mean that beer itself is harmless. If your cat happens to like beer, you should never give it still.

A cat that accidentally or deliberately ingested beer will experience the same effects as humans. Your pet will get buzzed and tipsy. However, this case will usually end up in a veterinary hospital.

Remember that cats are much smaller than humans. Even a small amount of alcohol can push the kitty to suffer from adverse side effects. A very small dose of alcohol may feel nothing for humans, but it is already toxic to cats.

While the effects of beer on a cat may seem amusing at first, it would usually cause the following symptoms:

The symptoms get more serious, the more your cat ingested alcohol. Any forms of alcoholic drink are not safe for cats, and any pet for that matter. Be it beer, wine, sake, rum, and whatnot, you should never give it to your cat.

Also, never infuse beer into your cat’s food. Sure thing, beer-soaked pudding or beer kibble might sound fancy, but the repercussions aren’t worth it. You’re putting your cat’s life at risk, and your pocket in a big problem.

Beer contains ethanol, the chemical term to the alcohol content of the drink. Ethanol is present in all alcohol drinks and will vary in levels, which will dictate the alcohol percentage of the beverage.

Pets can die when they ingested ethanol. Ethanol causes depression in the central nervous system that will lead to eventual death.

Alcoholic drinks are depressants and a diuretic in one. If your cat is exposed to beer multiple times, it will take its toll on their liver, kidney, and nervous system.

Ethanol poisoning among cats will occur about 15 to 30 minutes after the ingestion of beer. The effects will be faster if your cat ingested beer on an empty stomach.

So how much alcohol does it take to poison a cat? The answer depends on the size of the cat and if the kitty has pre-existing conditions. For your cat’s safety, never give even a single drop of beer. If your cat has poor health, it may succumb to a heart attack after massive beer ingestion.

What should I do if my cat drank beer?

If your cat drank beer, you should bring it to the vet right away. This will help combat any adverse symptoms that may compromise its health. Don’t wait for your cat to show symptoms before taking action, especially if the pooch has drunk a lot.

The vet will try to administer a counter-drug to flush out the alcohol content in your cat’s body. In case of excessive ingestion, the vet may induce vomiting to drain the beer that’s still on your cat’s digestive tract.

Your cat will also be put in an IV drip to administer the counter-drug and replenish lost fluids due to vomiting or diarrhea. Usually, cats will recover within 8 to 12 hours upon first treatment. However, if your pet ingested large amounts of beer, recovery may take longer – days sometimes.

As much as possible, don’t self-medicate your cat because it will only make matters worse.

What is cat wine?

Over the years, the pet industry has come up with tons of gimmicks, including the so-called cat wine. This non-alcoholic drink is said to be safe for cats since it’s made by combining fruit extracts. Some of the most popular ingredients for cat wine is beet juice.

Aside from that, cat wines are mixed with catnip to give the kitty the drunk effect. This is a safer alternative to beer since it’s non-alcoholic, natural, and suitable for felines.

But before you give your pet some cat wine, you should check with the vet first. You have to ensure that your cat doesn’t have allergies or sensitivities to the ingredients.

You should also know that not all cats have the genes to react to catnip. So if your kitty sips cat wine or cat beer like water, it’s possible that it’s not reacting to the herb.

Why is my cat trying to drink beer?

Is your cat trying to taste your beer when you place the glass on the table? Some suggest that it’s due to the scent of hops in beer. Cats in the wild will sometimes seek some plants to aid with their digestion.

In fact, cats with upset stomach will often eat grass, wheat, barley, and other fiber-rich plants. This could be the reason why your cat is attracted to the smell of your beer.

But even if your curious cat seems to gravitate toward beer, you should never give in. This weird craving may end up in an emergency visit to the vet.

Also, cats are curious beings. They will chew and eat anything that perks their attention, including your cold glass of beer. Your cat might be intrigued by the foam of the beer and decides to give it a try.

Alternative recreational drink for cats instead of beer

Instead of giving beer to your cat, you can explore other options to give the kitty some good time. The following are some of the good choices:

Is rubbing alcohol bad for cats?

Sure enough, rubbing alcohol is effective in killing fleas and ticks if soaked on it. However, you should never spray or pour it onto your cat’s skin. Isopropyl alcohol, for one, is toxic to cats, and it will dry their skin.

However, if your cat laps into rubbing alcohol, you should observe it within 30 minutes. If your cat ingested large amounts, it might have the same effects as beer. However, since rubbing alcohol isn’t food-grade, it will cause serious symptoms.

Can cats drink beer? The answer is no because it contains alcohol that’s toxic to cats. If your cat happens to lap on your glass of beer, you should observe it within 12 hours. The moment your cat experiences adverse symptoms, you must bring it to the vet right away. 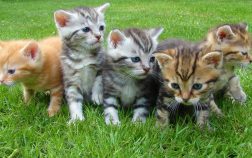 While cats are stereotyped as sassy and solitary, many can be affectionate and cuddly, too. It’s on how you raise the kitty, aside from … Read More 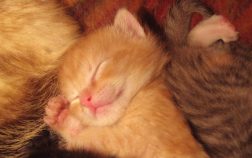 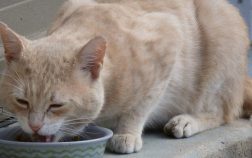 A 10-week old kitten is very social and active, often pouncing and playing around. With such energy, the question is this: how much should … Read More