Can cats eat chives? According to the ASPCA, chives are toxic not just to cats but also to dogs. This isn’t a surprise for long-time cat owners like me because chives belong to the Allium genus. It means that chives are actually a cousin of onions, an equally toxic food item for felines. You should never give it to your cat, regardless of the reason. Otherwise, you and your kitty will end up on an emergency trip to the vet.

Below, I discussed why chives are unsafe for cats and what you need to do if your kitty ingested some of it.

Are chives safe for cats?

Chives is an herb similar to green onions or scallions. It’s widely used in the culinary world as a garnish or key ingredient in herb mixes. However, chives are very poisonous to cats.

The toxicity of chives boils down to its Allium origin. It’s part of the Amaryllidaceae family, together with garlic, onions, leek, snowdrop, and some type of lilies.

Chives contain the N-propyl disulfide oxidant, which is the culprit to its toxic characteristics. This oxidant attacks the red blood cells (RBC) and causes cellular damage. Over time, N-propyl disulfide will dramatically decrease the RBC count of cats, which can lead to fatal consequences.

Cats are more susceptible to this oxidant than dogs, though both can suffer from poisoning. If not treated right away, the consumption of chives will lead to hemolytic anemia. It will also cut the supply of oxygen all over your cat’s body, with RBC as the main vehicle of oxygen.

Whether your cat ate fresh, chopped, dried, or powdered chives, it will cause the same reaction. It’s toxic and should never be added to their food. Besides, cats won’t benefit from the nutrients present in chives. It’s a plant and not a major part of a feline’s diet.

Depending on the amount your cat ingested, the toxicity of chives will vary from mild to severe. In general, chives consumption of about 0.5% of your cat’s weight is already enough to stir adverse reactions.

As a fellow cat parent, I highly discourage other cat owners from giving chives to their pets. It’s important to keep this herb off your cat’s reach. If you want to add some herbs to their food, you can opt for catnip, Valerian root, licorice root, pepper, and Cat’s Claws instead. These are relatively safe for cats if given in small amounts.

Why is my cat obsessed with chives?

Cats tend to develop different eating habits. My kitten Watson, for example, has a never-ending love affair with fish – even stealing leftovers from a neighbor once. The same goes for other cats and chives.

My friend back in college once had a tabby that’s obsessed with chives. He tried to hide it on other potted plants in his garden, but the kitty will always squeeze in to get into the chives. The cat would step on pots and containers, even toppling it at times.

This might be connected to the way cats love eating grass when they have an upset stomach. I also observed this on Watson, despite him being properly fed at home. The harm here is that cats may mistake chives for grass, which can lead to substantial consumption.

Another reason behind the chive obsession is that cats are naturally attracted to herbs. Catnip is an herb, and chives might resemble a bit of its smell.

While a tiny piece of chives won’t cause your cat to drop dead, you shouldn’t take chances of giving it to your kitty. Just because your cat is obsessed with it doesn’t mean it’s good for them. Remember that cats are like toddlers; they will try to put things in their mouths even if it hurts them.

What should I do if my cat eats chives?

If your cat ate chives, you should call the vet right away. The veterinarian will advise about the applicable first aid treatments you can do to alleviate the potential poisoning. Most of the time, the vet will instruct you to induce vomiting, but this may not be the case for all cats.

However, if you’re not sure if your cat ate chives, you should look for these general signs of poisoning:

You should seek immediate veterinary care for your cat if it ingested chives. Aside from the GI irritation, the bigger threat is hemolytic anemia. It can range from mild to life-threatening.

Never self-medicate your cat or induce vomiting without the instructions of the vet. As much as possible, bring the kitty to the vet’s clinic right away.

Is rosemary toxic to cats?

Rosemary is another popular herb often used side by side with chives. But unlike the latter, rosemary is actually safe and even beneficial for cats.

Proof of this is several cat food products infused with small amounts of rosemary. Nevertheless, the strong flavor of fresh rosemary leaves often drive cats away from chewing it. Like with chives, you should limit your cat’s access to rosemary to avoid other untoward incidents.

If you plan to give your cat rosemary oil or leaves, you must consult the vet just the same. While it’s not toxic like chives, each cat has varying sensitivity to each food item.

Cilantro or coriander is non-toxic to cats. Sometimes, it’s used on some cat food products, but only in small amounts. Half a teaspoon of chopped cilantro will give your cat an extra dose of Vitamins A, B, C, E, and K. It’s also rich in minerals like potassium, magnesium, and zinc.

Although it’s not toxic like chives, you should only give a pinch of cilantro to your cat from time to time. After all, felines are carnivores, and they won’t benefit much from plant-based food. My kitten Watson gravitates toward our potted cilantro, but we try to keep him away to avoid possible irritations.

I can’t stress this enough, but nothing beats the advice of a veterinarian if you’re planning to add cilantro to your cat’s diet. Remember that each cat can develop sensitivities to different food items. A quick check with the vet will help identify this.

Can cats eat chives? It’s a big NO because this herb is toxic and can cause severe anemia to felines. Your cat doesn’t need it either because its nutrients are not in line with their diet. But if your kitty happened to chew on some chives, you should seek proper veterinary care to prevent life-threatening effects. As a cat owner for more than 10 years, vets proved to be indispensable. 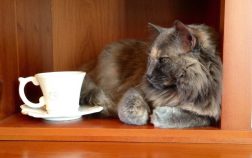 Pet owners have never-ending questions about what their cats can or can’t eat. One of those questions is this: can cats drink tea? The … Read More 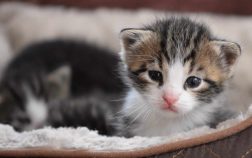 Kittens have a lot of similarities to babies. They also need something to soothe them at a very young age. This is why you … Read More 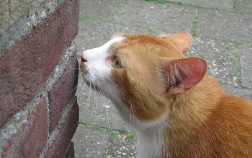 While it’s a given that cats have a strong sense of smell, it’s the scents they hate can be surprising. So what smells do … Read More