Cats have a never-ending love affair with tuna. It’s tasty, smelly, and very nutritious. But the question is this: can cats eat raw tuna? I don’t usually recommend feeding raw fish to cats since it’s prone to contamination. Also, raw tuna may contain bacteria that can be killed through heat exposure or cooking. Whether your cat is healthy or sick, you should never feed it raw tuna. Always cook it and ensure that it’s prepared well.

Health benefits of tuna for cats

Before we dive deep into the potential harm of tuna, let me discuss some potential benefits. Take note that these benefits are only achievable if you serve tuna cooked and in moderate amounts. The following are some of the potential perks of tuna in cats:

Can tuna upset a cat’s stomach?

Tuna itself isn’t going to upset a cat’s tummy. If well-prepared, it’s a good source of Omega fatty acids that keep your cat’s coat healthy.

However, the manner of preparation is the deal-breaker. Raw tuna might be tasty and appealing for your kitty, but it’s also mired with bacteria. Pre-packaged and frozen raw tuna is prone to Salmonella contamination. If your cat or you ingests it raw, the contaminated raw tuna can cause food poisoning.

But can my cat eat tuna sushi? Human-grade tuna sushi is usually safe for people, but not for cats. Even a small trace of contaminants can cause stomach upset.

Aside from that, the thiaminase level in raw fish is much higher than what your cat can handle. Thiaminase is an enzyme that breaks down the essential Vitamin B.

If your cat ingested too much thiaminase, its body supply of Vitamin B would dwindle. Over time, this will lead to neurological problems that will put your cat’s life in danger.

Skipjack and yellowfin tuna contain high thiaminase levels, so feeding it raw to your cat is a no-no. And for the sake of preventing food poisoning, you shouldn’t feed raw tuna at all. Take note that even if your cat’s diet has high Vitamin B levels, thiaminase can still overpower it.

Aside from that, not all cats love tuna. Some can have a fish allergy, much like how humans can develop the same condition. If your cat vomits and experiences diarrhea after eating tuna, you should bring it to the vet for proper treatment.

One of the biggest concerns with tuna consumption is mercury poisoning. This can happen to both humans and cats, regardless if the tuna is raw or not.

Tuna is high in mercury, which happens to be a highly toxic metal. Some signs of mercury poisoning in cats are lack of coordination, poor balance, dizziness, and weird behavior. If you notice these symptoms to your cat after eating tuna, you should bring it to the vet. It can either be due to thiaminase or mercury, which are both life-threatening.

Aside from that, consistent mercury consumption can lead to kidney disease. It’s said to increase the kidney’s protein levels that will become a burden to the vital organ.

Although a small serving of cooked tuna won’t hurt your cat, repetitive feeding can. You shouldn’t make tuna a major part of your cat’s diet. Tuna-flavored cat kibble is usually safe since it has controlled amounts of real tuna.

How much tuna is safe for cats?

Tuna should only be a supplemental treat and not a big part of your cat’s diet. A single chunk should be enough for the day. If you want to give your cat tuna regularly, it should only comprise 10% of their daily calorie intake.

Cats can get addicted to tuna, and they can consume dangerous amounts if you let them. Even if your kitty begs for more, keep its tuna intake to small amounts from time to time.

Also, tuna alone isn’t enough to sustain your cat’s nutritional needs. Sure, it’s rich in Omega fatty acids, but your cat needs more than that. Even humans can’t live off tuna alone.

If you’re going to feed canned tuna to your cat, choose one that’s in brine. Tuna in oil isn’t ideal since the oil content can fatten your cat.

Well-done tuna steaks are fine for cats. However, you should watch out over the seasoning. Too much salt isn’t safe for cats as well as other herbs that may have toxicity to felines. Also, avoid too much oil, especially if you have an already overweight kitty.

No matter what the preparation is, you should serve tuna well-cooked and in small amounts. Also, it shouldn’t be a daily thing. Once a week should be fine.

Of all the types of tuna, you have to steer clear of albacore tuna when it comes to your cat. Albacore contains mercury levels that are three times higher than skipjack or other fishes. This is due to the fact that albacore is a larger tuna species.

Chunk-light tuna is the best option if you’re planning to feed tuna to your cat. If your cat happened to consume albacore, you should observe it for potential symptoms of mercury poisoning.

Aside from albacore, fishes like swordfish, king mackerel, shark, bigeye tuna, and tilefish contain high mercury levels. You should also watch out for ahi tuna, which can have moderate to high levels of the dreaded metal.

Tuna cat food is usually tuna-flavored but with added veggies and fruits that are suitable for felines. Complete and balanced cat food is the best choice for your cat, regardless of its flavor.

Still, it’s worth checking the mineral components of the tuna cat food. When in doubt, you can consult with your cat’s veterinarian to know if it’s too much. The vet can also suggest safe options if you’re switching your cat to tuna-flavored cat food.

Can cats eat raw tuna? Vets agree that it’s not a wise decision. Raw fish contains bacteria and contaminants that can upset a cat’s stomach. Aside from cooking the tuna, you should only give it in small servings from time to time. It should never be a daily meal addition because tuna contains high levels of mercury. 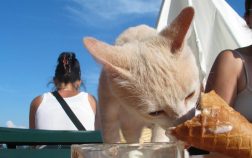 How long can a cat go without eating? Unlike feral cats, domesticated felines can’t go without food for long. It should be a cause … Read More 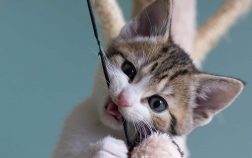 Cats are known for their weird behaviors – from face rubbing, head butting, and kneading. But one question is often unanswered: why do cats … Read More 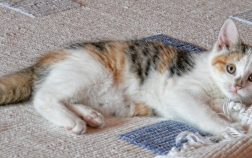 Do cats like salt? Many cats are attracted to salty flavor, being one of the three tastes they can detect. This makes salt a … Read More