Can guinea pigs eat cilantro? Is it safe for their consumption? Yes, guinea pigs can eat cilantro, and aside from that, there are many health benefits cilantro can offer. You will know more as you keep reading.

The addition of a herb called cilantro in the main dishes is popular. It is refreshing and zesty that is perfect for garnish and adding flavor to all kinds of foods. Guinea pig’s diet consists mostly of veggies. Since they are herbivores, and they can eat a variety of grass, hay, and herbs.

However, it is also necessary to take note that some leaves aren’t healthy for them. They could contain chemicals that could disrupt and harm their digestive system. As a guinea pig owner, it’s a must for you to know what’s best for your cavies.

In this section, we will tackle the benefits of cilantro. Though enjoyable for your cavies, improper preparation could affect their systems, too. Keep scrolling to know more!

Scurvy is a common disease that guinea pigs can have. Cilantro has Vitamin C to keep your pet healthy. Scurvy happens when there is a deficiency of Vitamin C in the body. Since guinea pigs cannot produce on their own, external sources may be needed, such as eating vegetables.

Some vitamins present in the cilantro are Vitamins A, C, and K. Vitamin A, Phosphorus, and Folate are responsible for the appropriate functioning of body organs and the formation of healthy tissues. It also helps in re-growing and repairing damaged tissues.

The job of Vitamin K is to ensure that the bones are strong and healthy. Also, Vitamin A promotes good vision.

Cilantro contains dietary fibers.  Their main job is to balance the cholesterol level. Thus, bringing down the possibility of having heart failure and other cardiovascular diseases. Fibers also help in paving the way to smoother digestion of foods.

Other vitamins and minerals boost the immune system and detoxify harmful fluids to avoid diseases.

Cilantro is a popular addition to curries, salads, soups, and other dishes. But do you know that aside from this, you can serve cilantro to your dogs, cats, or even rabbits? But were talking about guinea pigs, so can guinea pigs have cilantro? Do guinea pigs eat cilantro? The answer is yes. It has a lot of nutrients in it that covers a range of health benefits.

I would feed cilantro to ginger once or twice a week. But take note that it is essential to provide your guinea pigs with a gradual introduction to cilantro.

Start by giving one stem of cilantro at a time. For 12 hours, if there are no signs of diarrhea or discomfort, then you can start giving four stems of cilantro with leaves to your adult guinea pig. However, if these signs occurred, then consider keeping cilantro off the menu.

I’m thankful that ginger loves cilantro because I love them too!

Risks To Consider When Eating Cilantro

Feeding cilantro to your guinea pig is the right choice. However, giving them should be controlled as it can cause harmful effects. Cleaning our vegetables are advised to prevent diseases.

Pregnant guinea pigs are not allowed to have cilantro. The plant reduces the ability of the body to clot blood leading to too much bleeding. The baby’s health may also be at risk, and in some cases, both the mother and child die.

This happened to one of my friend’s pets;  he thought that feeding cilantro to his pregnant guinea pig would help it, but instead, it got sick and eventually died.

Here are some of the possible dangers that you should consider:

A possibility of a bloated and upset stomach is the result of uncontrolled feeding of cilantro. It is best to monitor and serve the foods fresh. Large quantities can choke your pet.

When changing your pet’s diet plan, do it slowly because a drastic change will result in diarrhea as their sensitive stomach couldn’t adapt. Excessive amounts of cilantro can have an outcome of severe diarrhea.

It would be best to stop feeding if you observe such actions and seek professional help when things worsen.

When your pet tries out new foods, observe their reaction as some of them can have itching and irritations that can endanger their lives in the long run. If this happens, do not feed them again cilantro.

Cilantro is high in oxalic acid and calcium that are responsible for forming bladder stones. Feed your guinea pigs in moderation and keep your eye always on them.

Is Cilantro For Guinea Pigs?

Cilantro is a delicious herb for your cavies. With the right amounts, it is a good source of nutrition for them. Here are some questions concerning today’s topic that we are going to answer!

Yes! Both the leaves and stems of cilantro are edible and safe for your cavies. The latter, however, provides a rough texture when bitten in to. If your guinea pigs like that, it is good for them to chew on cilantro stems. Moreover, cut them into bite-sized pieces to reduce the chance of choking.

In worse cases, yes. However, when given in the right amounts, cilantro won’t make your cavies sick. It is a must for you to note the correct serving portion when feeding your pet cilantro.

How do you serve cilantro to guinea pigs?

It is easy! Wash the herbs well before cutting it into bite-sized pieces. You could include the stems if your cavies like to chew on them. Moreover, you can mix your cilantro with pellets, fruits, and vegetables. Doing this will provide more nutrition and extra taste.

However, you should slowly introduce these herbs to your guinea pigs. A quick change in their diet could substantially affect and upset their digestive system.

What is the recommended serving for cilantro?

A few pieces of cilantro every day should be fine. If your guinea pigs are fond of it, you could add a little bit more. Make sure to feed them only with adequate amounts as too many herbs can ruin their stomach.

What other herbs can I give to my guinea pigs?

Parsley, thyme, basil, mint, and oregano are some herbs that are a great addition to your cavies’ diet. However, you should consider the right amount of these when serving. It is best to observe your pets’ reactions after giving them the stated leaves.

Whether can guinea pigs eat cilantro or not, prioritizing the health is essential and should be observed.  Cilantro, with the appropriate serving size, is the perfect addition to their diet.

Through this article, I hope that it helped as you more time with your guinea pigs and could live with a better lifestyle. Good luck! 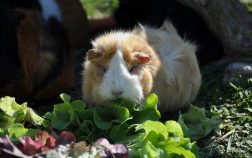 Can guinea pigs eat parsley? Of course, they can. What benefits does it have? To tell you, there are lots, though it’s mainly known for … Read More 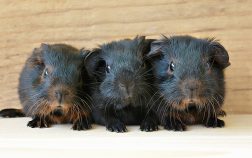 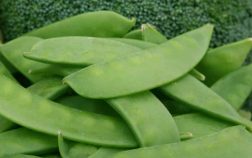 Can guinea pigs eat pea pods? Of course, they can. They’re healthy to eat. You will find out more benefits as you read the … Read More