However, remember to feed your guinea pigs corn on the cob only occasionally and not make it a frequent or daily meal. Definitely at the most only 1 to 2 times a week. 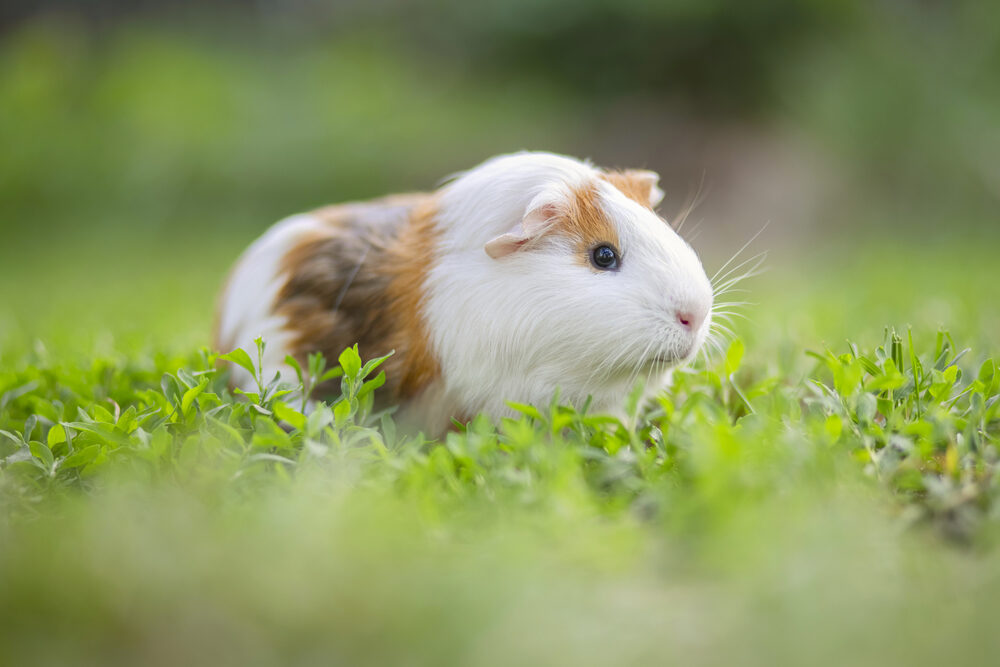 Iron and copper are the two vital and essential minerals for the blood. These two components are also present in corn. Feeding corn eliminates the possibility of deficiency of these minerals in the blood of your guinea pigs. This leads to strengthening and boosting the immune system of guinea pigs.

In all the body cells, iron is present, but it is a vital part of red blood cells for the transfer of oxygen. Iron prevents anemia in your guinea pig pets since it provides energy and eliminates fatigue.

Meanwhile, copper plays an important role in the formation of new red blood cells. So iron and copper work together to improve the blood and boost the immune system to achieve the ideal health for your pet guinea pigs.

Corn on the cob is rich in proteins, carbs, fats, and calories. Your pet guinea pigs will most definitely feel satiated and have a full stomach after eating corn on the cob because of these components.

Therefore your pet guinea pigs won’t get hungry after a short period and be full for a long time after eating corn on the cob. However, always note that you should still not feed your guinea pig pets too much corn at once every day. Digestion of protein requires guinea pigs to drink so much water.

If they eat a lot of corn on the cob frequently, sudden and massive weight changes may occur irregularly.

Antioxidants strengthen and boost the guinea pigs’ immune system to lower the risk of them having fatal diseases.

Aside from working on the immune system, antioxidants also eliminate toxic free radicals and repair the damage or complications caused by these dangerous free radicals.

Moreover, with the help of antioxidants, your pet guinea pigs will not age so fast. All of this is because of its many repairs and improvements to their health and wellness.

Corn on the cob is highly beneficial and provides many advantages to improve your pet guinea pigs’ health.

What Are The Risks Of Feeding My Guinea Pigs Corn On The Cob?

Feeding corn on the cob may also be detrimental to your guinea pigs if not given in the recommended amount. Here are just some of the risks:

Corn is one of the foods with high calories and carbohydrate content. Too much calorie intake will cause obesity. Guinea pigs don’t have the most efficient metabolism, so consuming more than enough corn can lead to extreme weight gain that can be bad for their health. For your guinea pig to be healthy, make sure the guinea pig weighs normally.

Aside from high carbohydrate content, sugar is one of corn’s main components. Too much corn will mean too much sugar, and too much sugar can lead to diabetes risks. Regulate sugar intake by reducing the portion size.

Sugar is also capable of causing digestive problems. Since guinea pigs have a limited digestive system, it is hard for them to disintegrate sugar to digest it properly. This can lead to constipation and other stomach issues.

Corn has calcium and phosphorus. Together these elements can cause urinary tract infections and other diseases. Avoid serving too much corn to avoid that.

Is Corn On The Cob Good For Guinea Pigs?

We have mentioned basic concepts about consuming corn on the cob, but some additional information might come in handy! 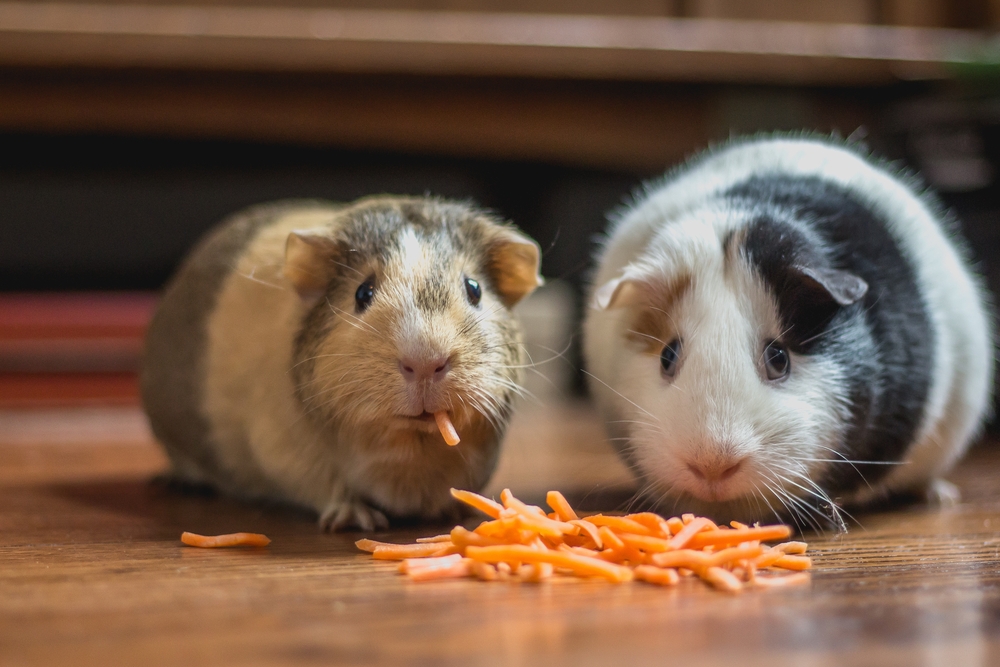 Can guinea pigs eat corn husks? The most definite answer is yes. Corn husks are preferable to guinea pigs than just eating the corn itself.

Guinea pigs love corn husks even more, and it is surprisingly one of, if not their most, favorite snack or meal to eat. Guinea pigs can enjoy eating both the corn husks and even the corn silks on top of the sweetcorn kernels and corn itself.

Because of the similarities of corn husks to hay, you can safely feed these delicious husks to your guinea pigs every day, and they will be more than happy to chew them.

These delectable corn husks pose no threat and can safely be a daily meal for your guinea pigs, unlike the corn on the cob, which you can only give them once or twice a week at the most. 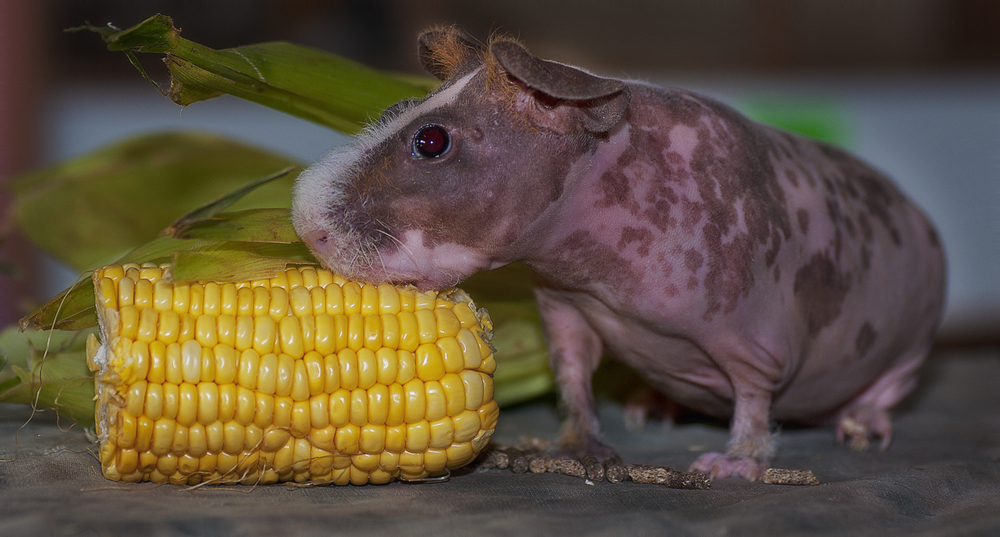 A definite no. You should never, ever feed your guinea pig cooked corn. It is not healthy for them, and when cooking corn, the addition of certain ingredients like salt is normal. Though it can make the food tasty, these ingredients are bad for your pets and can cause health issues.

Although serving canned corn in small amounts can’t warrant diseases, it is better to be safe than sorry. Canned foods contain preservatives and chemicals to help them stay for a long time. These preservatives can have dire consequences when fed to your little friend.

How much corn should be enough for my guinea pigs?

Corns are treats for guinea pigs, so the consumption should not be regular. Keep in mind that guinea pigs can only digest raw and uncooked corn. It is preferred to slice the cob into a smaller piece before giving it to the pig.

Corn cobs are preferred since canned corn has high sodium content that can cause urinary tract problems in guinea pigs. Overfeeding corn can cause obesity and other health problems, so it is vital to give them small portions.

How often should my guinea pig eat corn? 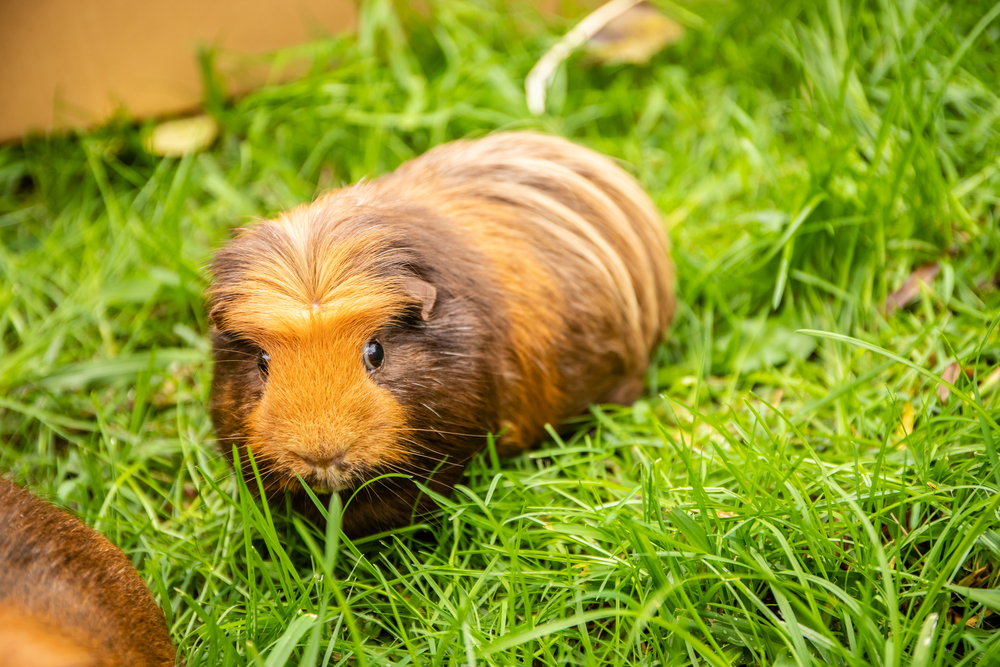 Since corn is not regular food, you can only feed them to your guinea pig every once in a while. Preferably, once or twice a week and not consecutively. You may add them to your pig’s food intake sometimes.

However, husks are loved by guinea pigs and don’t really have extreme digestive effects, so they can be consumed regularly.

Iron, copper, and other minerals present in corn are essential for the healthy immune system of your pet. But an excessive amount of these minerals can also have detrimental effects. So, as mentioned above, moderation is the key.

Being a responsible pet owner, you should be aware of crucial information that can hinder your little friends’ good health.

Thank you for reading this article, and we hope you have learned a lot!