Can guinea pigs eat snow peas, and is it safe for them to eat? Of course, snow peas have sufficient amounts of vitamin C content that is good for guinea pigs. There are more benefits that you can get from this.

As a guinea pig owner, I can attest that this kind of food is ultimately worth trying to feed your guinea pigs with. They will surely love eating this, that is, if they would like the taste. Take note, guinea pigs, just like humans, have different preferences regarding the food they eat.

Let me first tell some facts about snow peas before anything else. They are a kind of legume, precisely one among the varieties of pea. These are eaten whole while in its pods and when it is not ripe yet.

This is also known as mange tout, which is the French term that means to eat all. That is also the generic term used to refer both to snap and snow peas.

This kind of plant is also known for its edible pods and the fact that it lacks inedible fiber. Meaning to say you can eat them as a whole, including the leaves, shoots, and sprouts.

However, if you intend to feed them to your guinea pigs, you should avoid including the strings because they can be a choking hazard for your pet. Look at the snow peas closely and remove all strings that you have noticed before serving them raw to your piggy.

Snow peas offer various health benefits for your guinea pigs. For you to know more, let’s first look at their nutritional composition.

In this section is the nutritional content of snow peas. This data is true for every 100 g serving size.

Now, after looking at its nutritional attributes, can guinea pigs eat snow peas? Yes, it is great to serve your pet with this food. As you can see, it contains a massive amount of Vitamin C, which again is excellent for your cavies. You can give it to them often as part of their regular diet.

Although this vegetable can be cooked, it is best to serve it raw. If you cook the snow peas, chances are, they will lose some of their nutrients.

Snow peas are also an excellent source of different vitamins, including B1, B2, B3, C, and K, vital for health since blood clotting helps.

This vegetable is also a good source of folate. Aside from that, it also has high dietary fiber content.

Are Snow Peas For Guinea Pigs?

The question about whether or not snow peas are good for guinea pigs is answered in the affirmative. Before we get into details, let’s understand how to choose and keep them.

In choosing snow peas, you should get those that are crisp, and their pads are bright green. Also, keep in mind that small and young snow peas are tastier and tenderer than larger ones.

Make sure to avoid those that have damages, such as yellowing or dark spots. And of course, you should also avoid getting those that are nearly wilted.

Choose the fresh and ripe peas, wash them to get rid of any dirt. Both visible and invisible. You can give it to them with its pods not removed, but it would be best to remove them. But then again, even if you choose not to. It’s fine. It is also recommended that you mix it with other vegetables.

Veggies are an essential part of guinea pig’s diet, so feeding an adequate amount of snow peas is fine. Just do not serve more than two pieces at a time. Do this once a week.

But if you settle in one piece per serving, you can feed them twice a week. Regardless, avoid giving them peas more than twice a week.

Keeping and storing the snow peas

Make sure to keep the snow peas in a vegetable storage bag that is airtight. Then, store them in your fridge’s crisper section. Although it can last for a few days if you keep it this way, it is still best to feed them to your pets as soon as possible after you buy them.

As you have noticed, when buying snow peas from grocery stores, they are often sold in a frozen state. However, you can’t feed your guinea pigs with these. So I suggest that you buy these veggies in raw condition if you intend to give them to your pets.

Can guinea pigs eat snow peas that are cooked?

No, it is best to serve them raw. Foods served for guinea pigs shouldn’t be cooked at all. This also means that you should not feed your cavies with left-overs.

Additionally, guinea pigs are severe herbivores; that is why they would love eating raw veggies and fruits. Raw foods are more nutritious than those cooked because it loses some of its nutritional value whilst it is being cooked.

Yes, snow pea pods are definitely acceptable for guinea pigs to eat. But make sure to remove first the string on the sides.

Can I feed my guinea pigs with snow pea leaves?

Yes. Just like the pods, its leaves are also great to be served for your piggies. It is a healthy treat for your little pets that is good to be served everyone in a while.

Snow pea sprouts or also known as its shoots are great for guinea pigs to eat. If you don’t know what these are, well, they are young snow pea plants.

After a week of growing a pea seed, it will turn into a sprout. Then, as it began to develop its leaves, it would become a shoot. These are grown indoors all year round, but they can also thrive outdoors in chilly weather conditions.

Can guinea pigs eat snow peas? Probably, you now know the answer. Yes, it is decent food for your guinea pig. It is worth it to give it a try, given its excellent nutritional value.

As a guinea pig owner myself, I could recommend that you serve these to your pets. I love how my ginger enjoys munching them every time I feed it with snow peas.

According to most pet owners, if you’d like to give it a try, the recommended serving would be in a raw state for about twice up to four times a week. But again, feed in moderation. 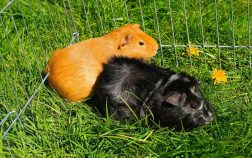 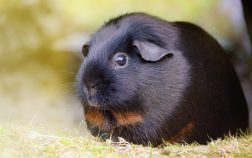 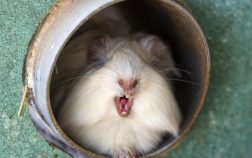 Can guinea pigs eat endive? Why not? They can. Out of several leafy vegetables worldwide, there’s this one that stands out among the rest; … Read More