The sight of cats eating watermelon may look cute, but have you ever wondered if it’s safe for your kitty? The good news is that watermelon is totally safe for cats and even dogs. It’s similar to pumpkin since it contains high fiber levels. Another benefit cats get from watermelon is the extra hydration. If given in moderation, watermelon will not pose any serious problem among cats.

Is watermelon good for cats?

Watermelon is one of the fruits your cats can eat. It’s juicy and has a nice crunch that many cats love. If you’re wondering, the following are the benefits of watermelon to your cat: 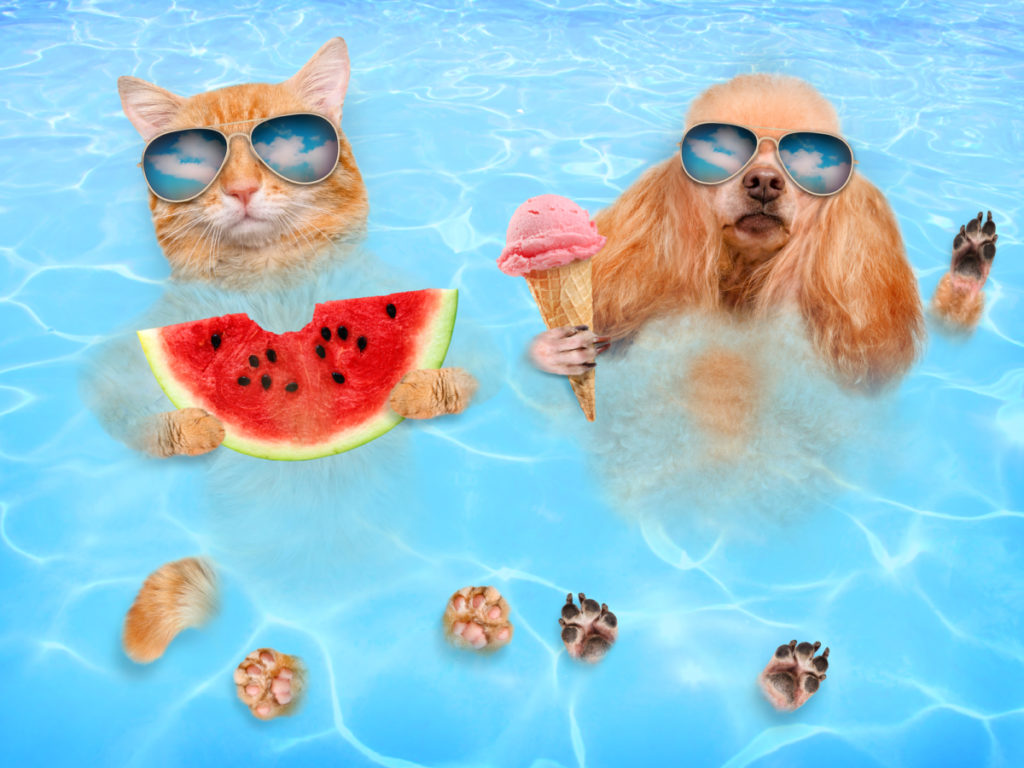 Is your cat constipated? A slice of watermelon may help the kitty’s digestion. Watermelon contains decent amounts of fiber that can help your cat have better digestion. It’s a great alternative to pumpkin if the latter isn’t handy.

Cats with a voracious appetite will thrive well in a serving of watermelon. It’s very low in calories and won’t hurt the kitty’s diet. Still, you shouldn’t overindulge your cat as too much can make any cat – and even humans – sick.

Watermelon is a good source of vitamins A, B1, B6, and C. This helps boost your cat’s immune system and overall wellness. 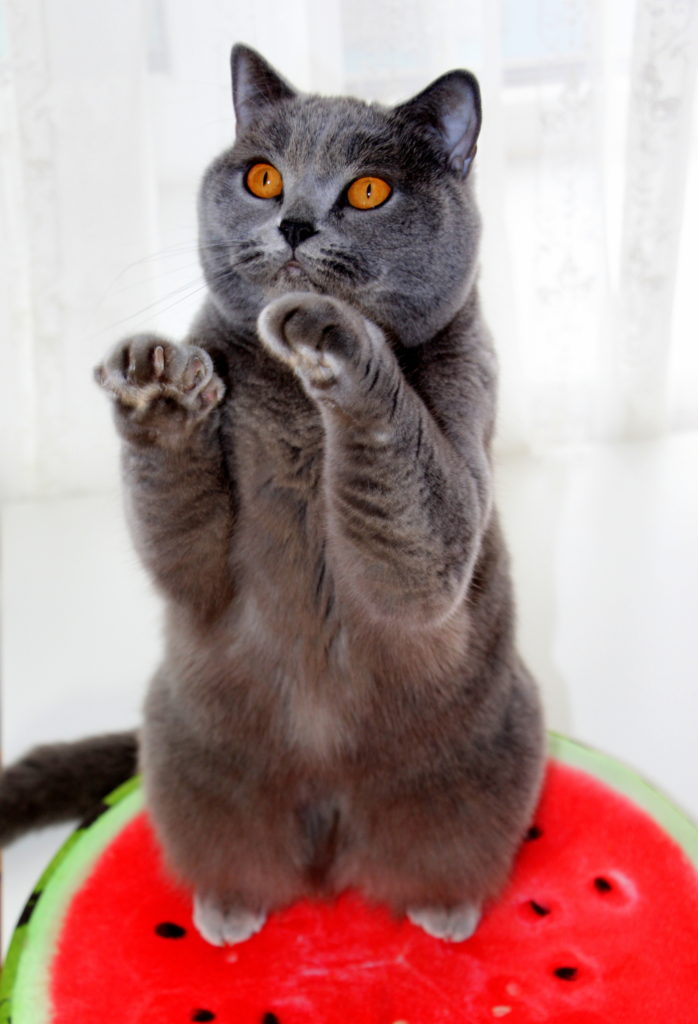 Aside from that, your cat will also get an extra dose of potassium, magnesium, biotin, and antioxidants.

If you run out of cat treats, you can chop some watermelon as an alternative. It’s delicious, and most cats will love it.

However, you should never give watermelon to diabetic cats(How long can a diabetic cat live). Watermelon contains sugar, which will make things worse for your pet. Nevertheless, you should not give too much watermelon because it will make your cat too full. When that happens, the kitty won’t be able to eat its designated diet.

Also, never sprinkle salt on the watermelon. While it will add taste to the fruit, it will just give your cat too much sodium. As you know, too much salt is bad for cats.

You should never give your cat watermelon seeds. You should remove it before giving the juicy fruit to your pet.

Watermelon seeds are choking hazards, especially for small kittens. It can also mess with the cat’s digestion and make it hard for the cat to eliminate.

Watermelon seeds contain small amounts of cyanide, which can be dangerous for cats. This comes from a sugar compound called amygdalin, which converts into hydrogen cyanide when digested.

This toxin will not be exposed if your cat won’t chew the seeds. But since your cat won’t spit out the seeds, it’s best to remove it from the watermelon. It will save you and your cat from the hassle of emergency vet visits.

Take note that while the cyanide content in watermelon seeds won’t hurt humans, your cat is a different story. Cats have smaller digestive systems, and they are more susceptible to toxic substances than we do. 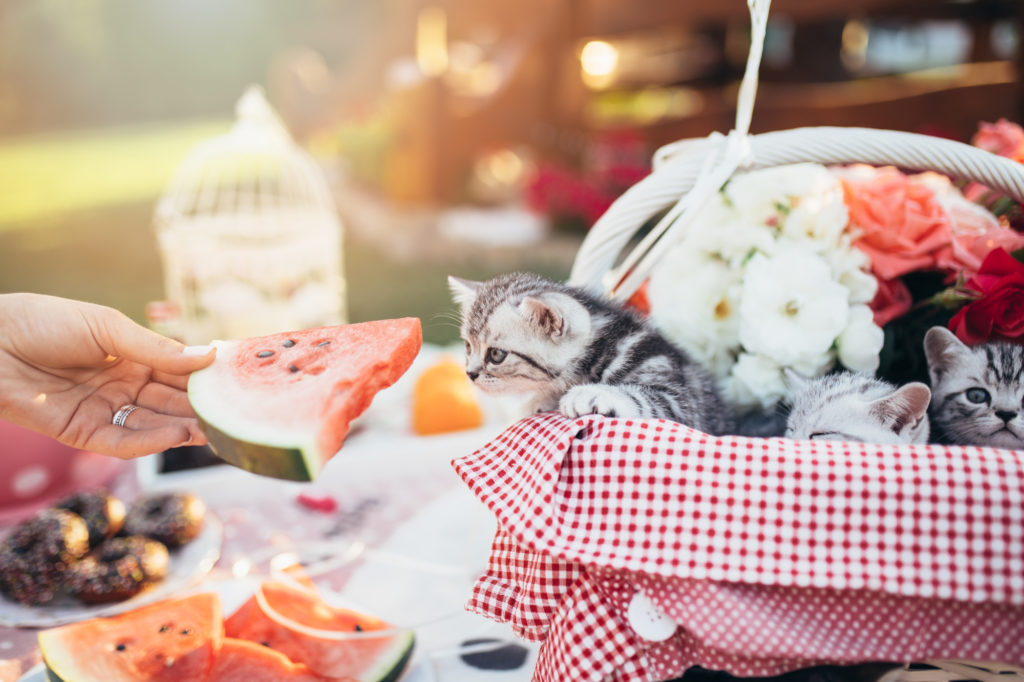 You don’t have to worry too much if your cat chewed some. However, since it’s stiff, your cat may find it hard to digest. In some rare cases, cats that ate watermelon rind experienced stomach upset.

If you want to give your cat some watermelon rind, I suggest chopping it into small pieces. Also, don’t give too much of the rind because it will make your cat too full for the next meal.

If you’re worried that your cat will get sick eating watermelon rinds, just chop it off before giving the fruit to your pet.

Can my cat become allergic to watermelons?

To be fair, cats can become allergic to anything, depending on what their immune system dictates. Cats can develop watermelon allergies, just as much as they can have allergic reactions to other food items.

The following are the signs of food allergy among cats:

If you suspect that your cat is suffering from watermelon allergy, you must immediately bring it to the vet. Depending on the situation, the veterinarian can trigger your cat’s gag reflex to vomit the remaining watermelon. An IV drip will be administered as well to combat dehydration due to diarrhea and vomiting.

Why do cats love watermelon?

Watermelon has an excellent taste and smell, which is very appealing to cats. Felines who are thirsty will also gravitate towards watermelon.

In the end, it’s all about how your cat will react to watermelon. Some cats don’t like it while others are obsessed with the fruit. 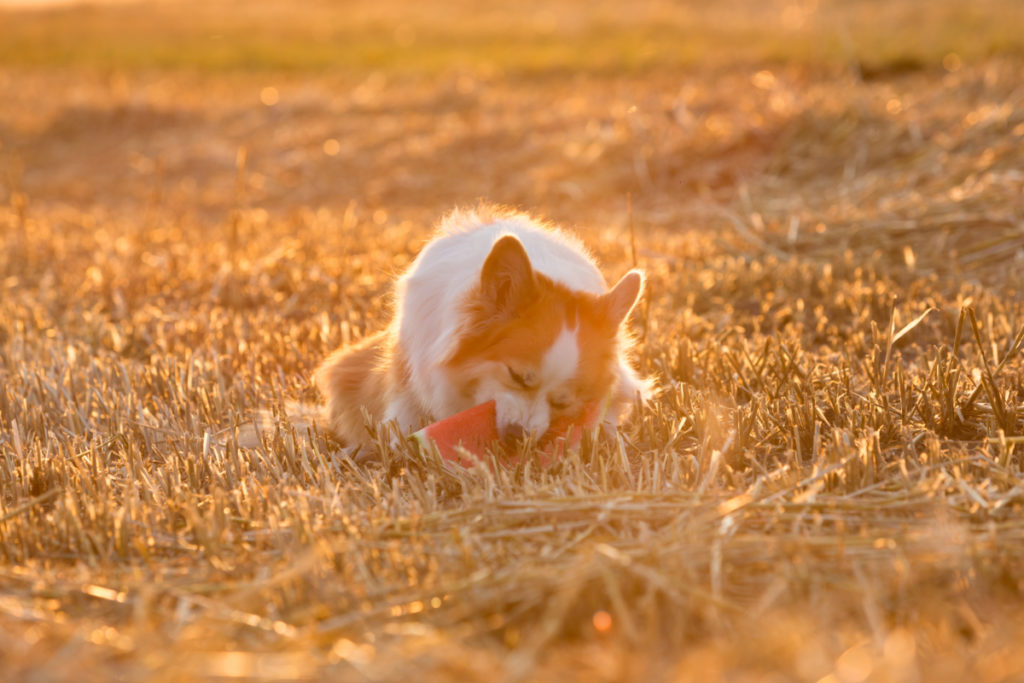 You can give your cat a small slice and see how it will react. Just make sure that you remove all the seeds to prevent stomach upset.

Aside from that, some cats also gravitate toward similar fruits like melon and cantaloupe. Some suggest that melon has a mild meat scent. Cats, who happen to be obligate carnivores, will surely like it.

Watermelon will not kill cats if you serve it clean and fresh. Also, you should remove the seeds and rind to prevent any risk of intestinal blockage.

There’s no reported case of cats dying due to eating watermelon alone. However, if your cat has allergies to the fruit, it’s a no-brainer that you shouldn’t give it to the kitty.

Just like with anything, you should always observe caution when giving watermelon to your cat. Too much can make any cat sick. You should also factor in the watermelon serving on the overall diet of your cat for that day.

You wouldn’t like your cat to be too full for its main meals. While watermelon is safe, it doesn’t contain the nutritional profile needed for your cat’s health.

Cats eating watermelon is fine as long as you watch out the serving. Giving the entire half of watermelon isn’t wise, especially if your cat is a big eater. Some kitties can eat to their hearts’ content until they get sick. This is the same with watermelons.

As much as possible, keep it in a few cubes or slices. After all, your cat still needs to eat full meals each day.