Bucks are generally good fathers to their kits. In case that the kits are lost, they often find them and return them to their nest.

But there are some cases that they have killed their baby BY ACCIDENT (all caps to emphasize that male rabbits do not eat their babies!).

This usually happens when their cage is small. I guess if you’ve witnessed your pet since young, you can say that they tend to move around- a lot!

Well, my Thumper is very active when he was just a kit. But then, I made him a huge house, so there’s no way his father will step on him. I mean, they have a big space to wander around.

Another reason for a buck to kill its kits is competition. The doe or the mother rabbit tends to focus on her offspring after giving birth to them, so the buck might not get the attention that it needs from the doe. As such, this might push them to kill the kits.

With that being said, you have to ensure the right size of the cage of your rabbits. It is also vital that you keep the bucks separated from the female rabbits when giving birth.

Should Kits Live With Their Fathers?

No, kits should not live with their fathers. The baby rabbit could get hurt in such a case.

Also, male rabbits are said to be lacking in paternal instincts. They are incapable of feeding their young ones.

In other words, baby rabbits would go hungry if they are with them. They cannot provide additional needs of their babies.

Besides, male rabbits might also perceive the new rabbits as their rivals in the female rabbits’ attention and their territory.

Here’s what you should do:

The moment you find out that the female rabbit is pregnant, it is recommended that you immediately separate her from the male.

That is because the male rabbits tend to be enthusiastic about mating, but his partner will not be in the mood for it.

Aside from that, pregnant rabbits tend to be volatile. They will most likely attack their mate if they approach.

Most experts would also recommend getting your male rabbits neutered if the female rabbit is pregnant.

Also, you should not put back the male rabbit right after the female rabbit gives birth. That is because male rabbits can still be fertile even after six weeks of being neutered. The doe can be impregnated again 24 hours after giving birth.

Will Rabbits Eat Their Babies If You Touch Them?

There is a popular myth that you should never touch baby rabbits. This popular legend also claims that the mother rabbit will eat the young rabbits as soon as they sense a human’s presence.

But my friend, this is ENTIRELY UNTRUE!

It is unlikely for rabbits to cannibalize their babies simply because someone touched them.

This abnormal behavior might occur if they will see you as a threat.

In this section, we will look at the possible reasons why do male rabbits eat their babies.

When handling the nestlings, you have to ensure that the mother rabbit sees you as a potential threat. Also, know whether she is getting stressed or not. Otherwise, it can trigger them to eat their young ones.

How To Stop Rabbits From Eating Their Babies?

I know I have said that it is unlikely for male rabbits to eat their babies, but to be sure, you have to take several precautionary measures to avoid this from happening.

Besides, mother rabbits also tend to eat their young ones. A similar precautionary measure will have to apply in such a case.

First, you should avoid breeding baby rabbits until they are six months old.

Before this point, the new rabbit is still considered immature, so they are not yet ready for the responsibility of being pregnant or having a litter.

Second, you have to keep up throughout the whole pregnancy process – before, during, and after.

If the rabbit is anxious or stressed, there is a higher possibility that she will eat the baby bunny.

As a pet owner, you should make sure that the rabbit will feel secure and safe.

Third, you have to increase the portion of protein in the diet of the rabbit. The ideal food to add is then alfalfa hay.

Put it in the hutch of the rabbit in the last few weeks of the pregnancy period. This is the typical thing that most pet owners do to ensure that the rabbit will not experience inadequacy in her nutrition.

Step #4. Keep the rabbits on watch

Next, you have to keep watch of your rabbit after giving birth since the mother rabbit is more likely to eat her afterbirth.

This is more plausible than a male rabbit eating the baby rabbits. That is because she might confuse the young rabbit for the placenta that they usually eat after giving birth.

Step #5. Give them love and affection

Lastly, you have to shower the rabbits with affection, especially the male ones.

Make them understand that they are not being superseded or replaced by baby rabbits.

Doing this will reduce the occurrence of jealousy and rivals due to territorial instincts.

Do I Need To Remove The Baby Rabbits?

No, baby rabbits need to be with their mother because it is unlikely for them to survive independently.

Remember, a rabbit is born deaf and blind. As such, they must live with the doe for the first eight weeks.

After this point, they will become more independent.

Specifically, they can already eat solid food, move on their own, and of course, they will not need their mother’s milk anymore.

You just have to keep watch on the first 24 hours; after this time has passed, the mother rabbit will no longer have any desire to eat her offspring.

Also, ensure that the nest is safe as this can help the baby to grow quickly.

Do male rabbits eat their babies? In my case, I have not experienced leaving Thumper with the babies.

As I have heard from other pet owners or even read online, the male rabbits do not typically eat the young ones. They can be attentive to their young ones.

But then, the answer to this question can vary across different rabbits.

Some bucks can be trusted to be together with their kits, but others might kill or eat them. It is also possible for male rabbits like male lions to even attempt killing their offspring if they see them as a rival, especially the male ones.

Maybe this is the case because most pet owners ensure that the male and female rabbits are separated during the pregnancy. 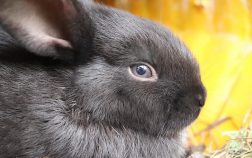 Can rabbits get lice? Are you aware that rabbits can host various kinds of parasites on their skin and fur? Well, you read it … Read More 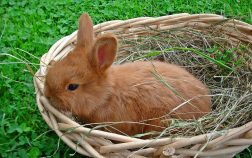 Do you ever wonder what the lifespan is and how long do Netherland dwarf rabbits live? This breed of a bun dislikes being picked … Read More 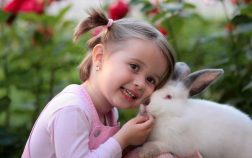 When can you separate baby rabbits from mother? The right age is after eight weeks. It is to ensure a proper digestive and immune … Read More