How many eggs do rabbits lay? Rabbits do not lay eggs. They are mammals, so they give birth to young rabbits- NOT EGGS.

As placental mammals, bunnies develop embryos inside their uterus, or what we generally refer to as pregnancy.

But it is not a surprise that not so many people know about this.

The question “do rabbits lay eggs” is quite common, and it does not sound weird and silly to most people. They think that rabbits are laying eggs, and we can’t blame them for that.

Rabbits laying eggs does not seem far fetched to the majority of people. But for pet owners, this might sound ridiculous.

The misunderstanding might be due to the celebration of Easter eggs and the Easter Bunny. Images of eggs and rabbits are flooded everywhere during Easter, so we cannot blame people for thinking that rabbits can lay eggs.

To clear out the confusion, let us dig deeper into why the Christian culture associates Easter with bunnies and eggs. Specifically, the latter being delivered by the former.

We will also discuss how rabbits give birth to their offspring if they do not lay eggs as well as how many kits a rabbit can give birth to on average.

Make sure to read until the end of this post to know the truth.

What’s The Purpose Of The Easter Bunny?

I know you’re curious about how many eggs do rabbits lay, and you’ve already known that rabbits do not lay eggs.

Why is there an Easter egg and Easter bunny?

This is the common question that people would ask after discovering that apparently, rabbits do not lay eggs. Probably, you have been asking the same question by now.

The idea came from a pagan celebration every spring. This is eventually interconnected to the religious holiday.

A particular legend tells about a goddess of spring named Eastre, who turned a frozen bird into a snow hare after a long winter. That particular snow hare can lay colorful eggs.

There is also another story that talks about the lairs of birds.

The story resembles the grass holes where a young hare usually nestles as it waits for her mom to return after searching for food. The similar appearance of the two resulted in a legend that eggs came from hares.

Now, if you ask how it is related to rabbits?

It appears that rabbits have quite a reputation when we talk about rapid reproduction. This makes them the perfect object that can symbolize spring.

I know, the connection between eggs and bunnies is still strange. I find it weird, too, by the way.

When Roman Catholicism has become the main religion in some countries like Germany during the 1400s, the pagan belief has shifted into Christianity. People started to associate the Easter egg with the resurrection of Jesus.

You will know that a rabbit is pregnant if you notice the following things:

First, if she is in a nest-building, this is when a female rabbit, due to her instincts, is building a nest by using straw or hay. In other words, this is a typical pre-pregnancy preparation that female rabbits do if they are pregnant.

Second, your rabbit can be pregnant if she shows aggressive behavior. Typically, a rabbit will make a defensive growl if you get near them. They might as well refuse your strokes or petting habits.

Third, soon-to-be mother rabbits tend to pull out their fur. Then, they will use this as a blanket to keep their babies warm.

If you notice any of these signs, then your rabbit can be pregnant. In such a case, it is recommended that you take her to your veterinarian. This way, you can confirm if your rabbit is pregnant or not.

How Do Rabbits Give Birth?

The pregnancy period of a rabbit typically takes between 31 and 33 days.

When a female rabbit gives birth, the offspring is called kindling.

The labor typically takes 15 minutes, and it usually comes about during the early hours of the morning.

Giving birth is innate to rabbits, so they barely need help from humans during the whole process.

As such, you have to check if all the babies are alive. After that, you should leave the nest for a few days.

If you disturb the mother rabbit, it can stress her, causing her to stop feeding the kits.

In case you have a concern, it would be best to consult your vet instead.

How Many Kits Can Rabbit Conceive?

Kit or kitten is the term used to refer to baby rabbits.

On average, the litter of a rabbit can contain one up to fourteen kits. But the most common quantity is six.

Baby rabbits are born blind, deaf, and hairless. But after ten days, you will see that they are starting to develop.

The doe or the mother rabbit will nurse her offspring usually two times a day – at dawn and dusk. Typically, the feeding will only take five minutes because the milk of mother rabbits is rich in quality.

Accordingly, it would take four up to six months before kits will be fully weaned.

During that time, you should keep the male rabbits separated from female ones. That is to prevent the doe from getting pregnant again after she gave birth.

Yes, rabbits occasionally experience a false pregnancy. This is when the doe exhibits typical pregnancy behaviors such as nest building, for example.

In such a case, you have to take her to the vet to make sure if she is really pregnant or not.

But if you are avoiding pregnancy for your pet, experts’ recommendation is to get her neutered.

The idea of rabbits laying eggs sounds so silly.

I can’t imagine my pet rabbit Thumper laying eggs. First, because, as I have said, rabbits don’t lay eggs. Second, Thumper is a male rabbit.

The misconception that rabbits lay eggs is mainly due to the Easter Bunny and Easter eggs. You may find this surprising, but rabbits really do not lay eggs.

They build a nest because they need somewhere cool when giving birth to their young ones. The mother rabbit is even preparing the nest with her own fur.

Make sure not to touch the kit with your hands after birth. Also, keep the male rabbits separated from the doe after giving birth to avoid re-impregnation. 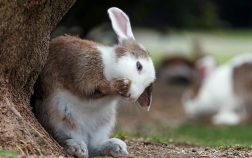 Are you wondering: can rabbits eat melon? The answer is an undoubted yes! Bunnies can consume this fruit, given that they only have it … Read More 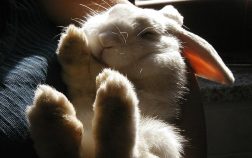 Do you ever wonder at what time of the day when do rabbits sleep? If yes, then they usually sleep deeply at noon and … Read More 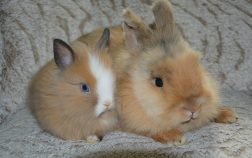 Can rabbits eat bananas? The answer is in the affirmative. But then, when we say yes, it’s not necessarily good for them. What I … Read More