Sometimes, you’d need diapers for your dog. It could be due to incontinence, other health problems, or when you’re taking the pooch outdoors. Dog nappies come handy, and it will save you from the shame of your dog pooping in public places. For this post, I will teach you how to make a dog diaper using items at home. Below, I discussed different DIY diaper options that even dummies can make.

Pros and cons of dog diapers

Dog diapers can save the day, especially if you have freshly installed carpet. Aside from preventing your dog from soiling the floor, dog diapers are also useful for female dogs in heat. It blocks male dogs from licking the rear of the female canine as well as the possibility of mating. And if the female dog in heat has a menstrual flow, dog diapers will catch the mess.

Aside from that, senior dogs will benefit a lot from using diapers. Similar to humans, older dogs will have frequent accidents around the house since they no longer have the energy to move around fast. Most commercial establishments will also require that you put your dog on a diaper before going in.

Lastly, dog diapers come handy when your dog is sick or suffering from incontinence.

However, you should never use dog diapers for house training. It’s counterintuitive, and your dog will not learn how to hold it because the diaper will eventually catch the mess.

How to make DIY dog diapers

If you’re looking for the simplest DIY dog diaper, you’re at the right place. For this DIY option, you only need a baby diaper and a pair of scissors. Here’s what you need to do:

However, the downside here is that you have to keep buying baby diapers. It’s not practical and will be such a waste. If that’s the case, you can move on to the next option.

For this one, you only need a sanitary pad and a pair of children’s boxer briefs. Here’s how to do it:

Another dog diaper is one made of a pee pad. It takes a lot more cutting, but the steps are simple and easy to follow. Here’s how it goes:

Much like buying baby diapers for the first DIY option, pee pads will incur costs in the long run. Anyway, if you have unused pads at home, it would be convenient to use some of them.

If your goal for using dog diaper is to prevent mating or for your female dog’s menstruation, the sock option works well. You only need an old sock and a pair of scissors.

The good thing about this DIY dog diaper is that the sock is washable. You can use it repeatedly on your dog without spending anything. And if the sock diaper got worn out, you can make another one out of old pairs.

If you have an old t-shirt you no longer wear, you can use it to make dog nappies. Here are the easy steps:

Once the first t-shirt dog diaper wears out, you can make another one from just about any fabric that you have. This is cost-efficient, especially if you have a large dog that won’t fit in any baby diaper.

How to make dog diapers stay on

One of the struggles when using dog diapers is ensuring that it stays on your pet. Some doggos will try to take it off the first time you put it on. This is a normal response since dogs aren’t used to wearing anything. Here are some of the hacks I recommend so the dog diaper will stay on the entire time:

Knowing how to make a dog diaper is a money-saving skill. You will also reduce wastes at home as compared to buying bulks of commercially made dog diapers. With a little creativity and some items at home, you can make a low-budget dog nappy. 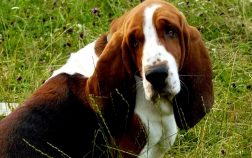 If you’re an aspiring dog owner looking for your first pet, you’d likely want a calm pooch. These doggos are more comfortable to raise … Read More 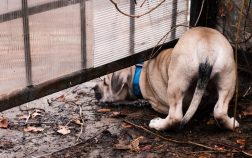 Property owners who don’t have the budget to put up a physical fence usually invest in an underground dog fence system. With this system, … Read More