It was my first time walking Sherlock when he suddenly lashed out at another dog. As my pup barks, I’m panicking and thinking of what to do. What if the other dog fights back? If the dog you’re walking is barking at another dog, what should you do? The answer is simple: keep a straight head and distract your barking dog. Call its name and block its view of the other dog, either by using an umbrella or walking your dog in a different direction. You can also do this when the other dog starts to approach your spot.

Many newbie pet owners will experience this scenario. It’s easy to panic and yells at your dog, but none of these will yield desirable results. Worse, your dog will bark even more and trigger a dog fight with another canine. In this post, I will share with you some of the things I do whenever Sherlock starts to bark at another dog during our walks:

Why your dog barks at another dog

Most reactivity among dogs, such as incessant barking is due to fear. If it’s your dog’s first time walking or seeing another dog, it may bark as a way to ward off the stranger canine.

If not fear, barking is a way of imposing their dominance. A barking dog while walking is a sign that the pooch is declaring that this path is his. You will also notice that your barking dog’s eyes will be darted in the direction of the other canine.

However, if pressed ears accompany your dog’s barking, raised hackles, and lowered rear, it means that your doggo is scared. But if your pooch’s stance is domineering and imposing, it shows that your dog is ready to fight.

But in most cases, a dog barking while walking is just a friendly gesture. If a waggy tail accompanies barking, your pooch might be interested in meeting the other dog.

You should always read the situation and your dog’s body language to know what’s behind your pet’s habit of barking to another dog.

How to stop my dog barking when out walking

Asking your dog to sit in the middle of a barking frenzy is not smart. A seated dog will feel vulnerable and powerless, which will make your pet anxious. Instead, it would be best if you distracted them from barking by saying the cue words ‘Come!’ or ‘Leave it!’. Calling your dog by the name will also help get its attention.

The moment your dog barks at another canine during your walk, bring out a small piece of smelly treat. However, don’t feed it to your dog right away. Call its name and say the cue word ‘Stop!’ and wiggle the treat in front of its face. This way, your pooch will know that a treat is up for grabs. Once your dog stops barking, give it the treat and praise it. You should walk your dog away from the other canine as soon as possible since the treat only buys you a few seconds of distraction.

Don’t give your dog a chance to bark at other dogs during your walks. Always keep it fun and check the path for any dog that might leap out of the fence.

Instead of merely walking, try running in circles, backtracking, zig-zagging, and other routines that will stimulate your dog’s mind. These activities will also drain your dog’s energy, which will leave them too tired to bark at other dogs.

Dogs that are not well socialized or introduced to other canines will likely bark at any dog they see.

Ask a friend to bring his or her dog over your house and let your dog see the other pooch at a distance. If your dog barks, call his name and give the ‘Stop!’ command. The moment your dog stops barking, give it a treat. Repeat this process and decrease the distance between the two dogs until your pooch is no longer barking.

If you have a male dog, it’s possible that the barking is due to being territorial. When your male dog encounters another male dog during a walk, its territorial instincts will kick in. Still, this tendency toward aggression varies per breed and level of training.

It’s best to have your dog neutered to reduce its aggressive tendencies. By neutering, your pooch is less likely to start dog fights with another male. It will also help mellow down your dog’s bold personality and tendency to run away to seek a mate.

Some dogs are more neurotic than others. Your pooch may become overstimulated and over-aroused by the new scents on its new walking route. Such arousal can escalate to aggression quickly. You should know how much your dog can take in terms of being exposed to new stimuli. From there, train your dog to be desensitized so it won’t bark on other dogs on your next walks.

My dog barks at strangers on walks!

Is your dog barking on strangers during walks? It can be due to fear, overprotectiveness, or anxiety due to unfamiliarity. Don’t worry because there are a lot of ways to suppress this behavior.

You can always start with socialization, where you desensitize your dog to the presence of other people at home. Feel free to invite friends and family over, but introduce them slowly to your dog. Again, over-stimulation can easily get the best of a neurotic canine.

It always pays to train your dog not to bark on people and other dogs. This should be part of your pooch’s obedience training, even before it goes to its first walk around the neighborhood.

Why does my dog bark at some dogs and not others?

One time, I walked Sherlock around our neighborhood when he started barking aggressively on another canine. Take note that this isn’t the first dog we encountered during that walk. We passed by four other dogs, but only when we met the fifth canine that he started barking.

What happened here is trigger stacking. Your dog encounters different triggers until it can no longer hold it in. The overstimulation and over-arousal will trigger your dog to bark on another canine or person.

Your dog may feel a little antsy toward the first dog, and then its fear builds up until it snaps on the last dog. Like humans, dogs have their limits. Still, you can expand that limit by training your dog to be more tolerant of canines around.

Should I let my dog bark at other dogs?

Some pet owners have a theory that if they let their dogs bark out, the pooch will eventually stop. There’s some truth to this theory, but the incessant barking doesn’t always sound pleasant. It would be shameful for you as a parent, and the people around you wouldn’t like the noise.

Also, by letting your dog bark its heart out, you’re just fueling another behavioral problem. Your dog will think that barking is acceptable. Soon enough, it will keep barking everywhere, which can even put you in trouble.

Some dogs will often use barking as a way to ease their anxiety. This isn’t healthy and must be addressed right away. Training will go a long way here, no matter what breed your dog is.

A properly trained dog is easier to walk. It will also give you peace of mind that your dog will not engage in a dog fight or bother other pet owners.

If the dog you’re walking is barking at another dog, what should you do? The first thing you should do is to get your dog’s attention. Never shout or hurt your pet. In the end, your pooch will not know what those punishments are about. Instead, train your dog to be more tolerant of other canines so both of you will have a more harmonious walking experience. 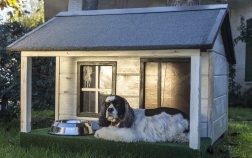 Pet Cosset may receive some form of compensation from the links on this page, at no extra charge to you. Learn more. With the winter … Read More 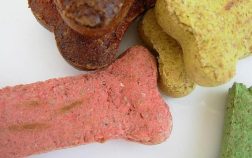 Can dogs eat Spam? While Spam is a flavorful and convenient choice of meat for dogs, it’s actually unhealthy for them. This processed meat … Read More