Cavies are considered an adult if they are already six months old up to five years of age.

Though they do not grow any bigger, cavies still need to have macro-nutrients like protein and fiber in their body.

Do not forget that your pet’s micro-nutrients are also needed because vitamins and minerals are essential for its health.

You can find these benefits in hay and pellets, which should make up the highest percentage of its food.

In this article, we will elaborate further on the time where the guinea pigs stop their growth.

If you are ready, then let us delve right into it!

When do guinea pigs stop growing?

As we all know, guinea pigs are tailless rodents, which people often mistook it to be little.

Now, that is not exactly true as they believe it to be. A mature cavy will have a size of about eight to twelve inches in length.

When compared to other rodents, that size is relatively more extensive than others.

You must note that the length of a cavy’s body will depend on many factors in its life. It may vary due to its gender, male or female, and also due to its breed.

I have a cavy named Ginger, and he is a very adorable one. He has reached fourteen months, and as his owner, I am aware that this age is the specific time he stops growing.

Since guinea pigs do not have a tail, it is not difficult for you to measure its length.

It would be an issue if ever its tail is as long as its body because you can have a hard time measuring it.

Once you have a baby guinea pig, the best thing that you should do is to document it because you won’t enjoy it for too long.

Why so? Because cavies grow at rapid pacing, I am sure that you will also be amazed.

The pups of cavies at birth have three to four inches, which I think is super cute!

You have to understand that also the length of the newly-born babies depends on tons of factors.

The litters of a mother guinea pig have a count of about one to six adorable pups.

You cannot expect that all of the babies are the same in size because they will undoubtedly vary from one another.

Like we mentioned a while ago, cavies proliferate, which is incredible!

At 14 months, that is when their bodies will remain as it is, and they will stop on growing.

By the time it is 14 months old, you can already call your pet a mature one.

There are other scenarios in which they can still grow but only a very tiny bit!

Most of the time, cavies will be fully grown upon reaching that specific limit of age.

When your pet is already five years old, you have to understand that it will be a senior at that age.

You need to aware of this matter because a senior cavy may need special care and attention from you.

Please do an annual check-up for your beloved pet with the local veterinarian whom you trust the most.

Are you asking why?

At that age, the health of your pet is not as robust as it was when it is young and energetic.

If you want it to grow a lot longer, pay attention to its health, and be sure to monitor it as often as you can its owner.

Who would want to lose a pet due to irresponsibility reasons, am I right?

Make time with it and do regular exercises specially made for your cavy to be fit and healthy.

Its golden years are unquestionably critical, so be sure that you make daily interactions and check its wellness.

How To Handle Guinea Pigs

Guinea pigs are indeed the right pet, especially for children, because their size fits perfectly.

It is excellent for your child to have a cavy as a pet because these rodents love to sit on laps and being stroked (which is the normal pet handling of children).

Guinea pigs are also gentle ones because they will not jump out of your lap and won’t try to have an escape.

As an additional benefit, cavies won’t fit into tiny and hard-to-reach places because if that happens, you will indeed have a hard time getting it.

Here’s the most important thing you should consider- the cage size.

If you desire to have a guinea pig, you have to buy a cage to serve as its habitat.

The very first thing that you have to consider is the size of the cage or hutch. And why is that so?

The answer is relatively simple. It is common sense that you want an adequate space for cavies to play around and also consider their size as they grow mature.

It would be possible if you are aware of its average mature size upon considering the age and its breed.

If you fail to consider, there is a big chance for you to buy a second cage as it grows more significant, and its cage is too narrow for a run-around.

Not that you will waste money, your pet will also have a hard time being familiar with its new home.

I am telling you this because this was a mistake which I made in the past.

When I got Ginger from a pet store, she was about a few weeks old and a new pet owner, and I researched a lot about the mature age and size of a cavy.

I did not believe that guinea pigs grow at such a high speed and that indeed amazed me!

The thought of all is that you need to be aware of the characteristic, physical size, and even proper diet of your cavy.

In that way, you and your pet can have the best time in life and enjoying each other’s company.

When do guinea pigs stop growing?

For the final words, during the six months from a cavy’s birth, it does not stop growing.

The specific age at which they halt in adding size to its body is 14 months old.

As a pet owner, you have to be aware of this not to expect it to grow much more significant.

Please give more attention to your pet as it grows old because, as time pass, it will also be crucial in case of its health.

Be sure to play a lot with it to have enough exercise for a fit body.

We surely hope that you have learned many important facts about guinea pigs about when it stops growing.

Good luck with being a pet owner, and we that you very much for reading this far! 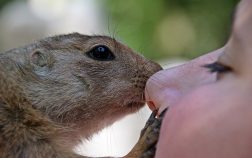 How to cut guinea pig’s nails? Nails of the guinea pigs are growing continuously like us humans. In the wild, they tend to file … Read More 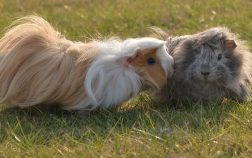 How old do guinea pigs live? Well, guinea pigs have an average lifespan of 5 to 7 years. Although guinea pigs don’t live that … Read More 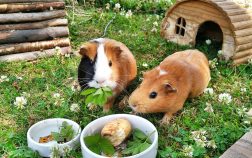