Are you wondering why do guinea pigs have red eyes? We commonly perceive guinea pigs to have black and beady eyes. Surprisingly, other cavies don’t have those and have red, ruby-like eyes instead.

I am also shocked to know that some of my friends have piggies with different eye colors.

However, I researched and discovered that this phenomenon emerged by two main factors: albinism and eye infections.

Having guinea pigs with red eyes could be intimidating and unusual. It could even make you worry about your cavies’ overall health.

There are certified veterinary explanations concerning this anomaly, which we will discuss further in today’s article.

Why Guinea Pigs Have Red Eyes

Why do guinea pigs have red eyes? 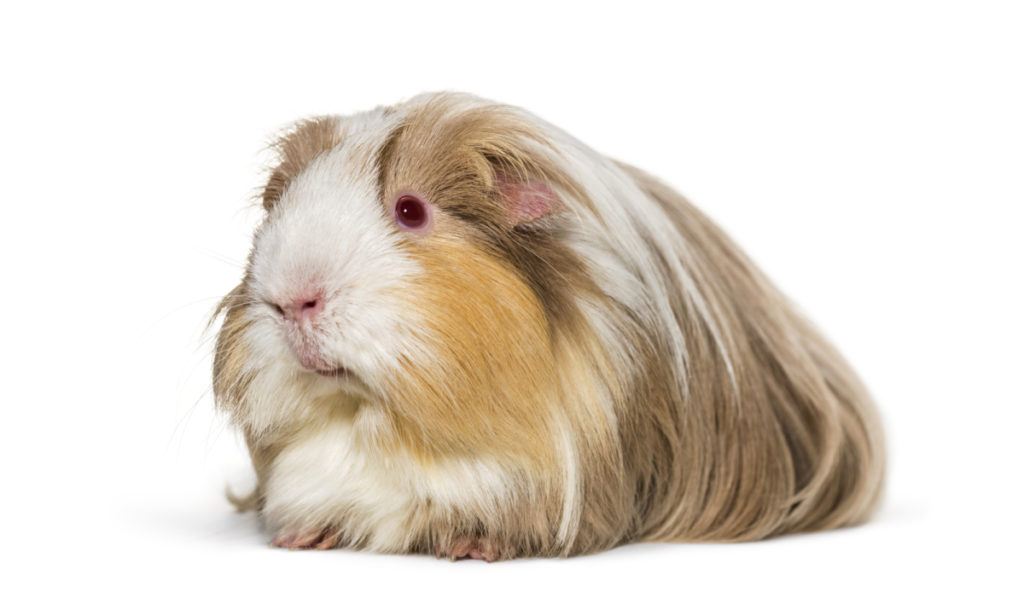 We can trace the change within the standard eye color between guinea pig species back to these two main aspects:

Since birth, Albino guinea pigs, described as cavies with white fur, are unlike other members of their species, is caused due to genetic mutations that altered the overall pigmentation of your pet.

Tyrosinase is the enzyme responsible for pigmentation and “coloring” your guinea pigs into their rightful colors.

However, a significant lack or overall elimination of the said enzyme during their development stage results in albinism.

Due to their lighter color and eye color, albino guinea pigs are more sensitive to light than their buddies.

So, if you expose them to sunlight for a long time, they tend to get stressed out, making them uncomfortable.

Moreover, some albino guinea pigs are more sensitive to light than others, caused by their albino gene’s dominance, making them more prone to slight burns and heat stroke. 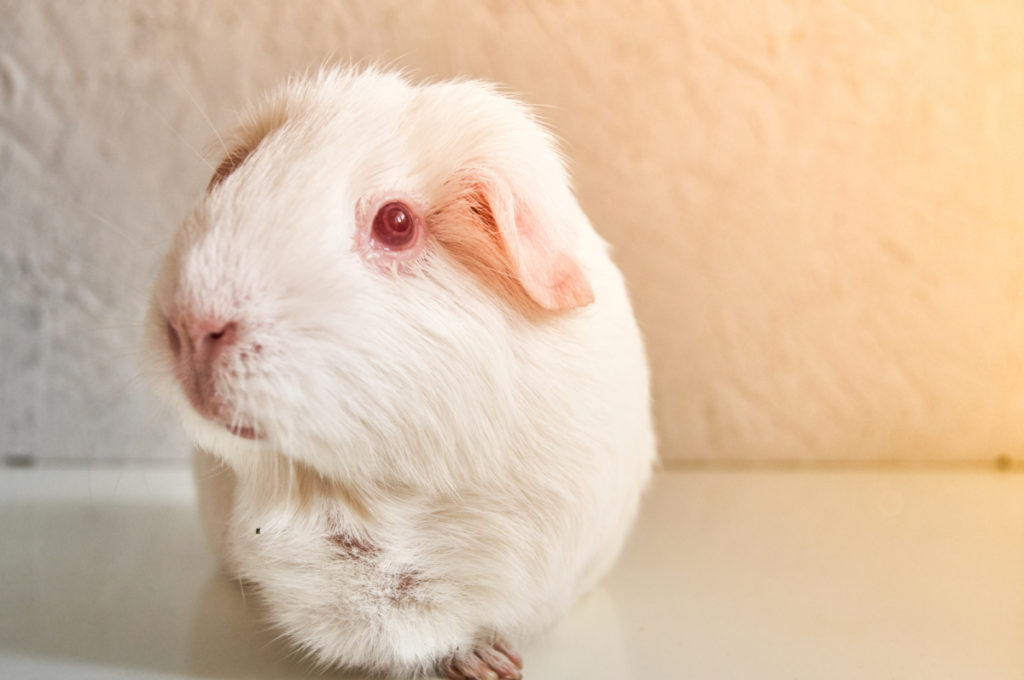 If you have an albino guinea pig at home, keep them in a slightly-dim, warm place to prevent any mishaps or accidents.

There are some cases where a guinea pig could have red eyes since birth, yet they retain their natural fur color.

It happens because guinea pig breeders specifically handpicked cavies with albinism (or even red eyes only!) mate with other species. Making the piggy a “partially albino” guinea pig.

A guinea pig could’ve had black or brown eyes when they were born. However, what if their eye color suddenly turned red at any point in their life?

In this case, the sudden shift caused by an eye infection has nothing to do with their genetics. The red-eye is a side effect of an internal inflammation within their visual system.

This inflammation serves as a bridge to a series of eye diseases caused by a bacterial, fungal, or viral infection.

Some of the eye diseases that could lead to the eyes’ reddening are conjunctivitis, glaucoma, and hyperemia.

If you think your pet has an infected eye, immediately seek veterinary help for them to treat the problem correctly.

If a guinea pig has red eyes, it most likely has this behavior:

Since their eye color is different due to their genetics, red-eyed guinea pigs also possess behaviors and traits that slightly diverge from the rest of their species.

Some guinea pig owners could be frightened and associate their red-eyed cavies with something that is “evil” or “lethal.”

Moreover, this could also root in the guinea pigs that are commonly fighting with each other. This aggression has no direct correlation to the color of their eyes.

The lack of pigmentation and albinism doesn’t affect the behavior or personality of your piggies. Guinea pigs could become aggressive regardless of their eye color.

This behavior of your cavies serves as their fight for dominance within the cage. Most guinea pigs prefer to live in solitude and rarely interact with their friends only.

Once they do, your pets might fight with each other and why do Guinea pig fight since one of them has to prove their dominance (leader) over the other (subordinate).

This leader-subordinate system; common among guinea pig species; as an owner, you have to ensure that they are safe and no one is away from harm during the said process.

Despite knowing them as social creatures, aggression can still be an issue for some owners.

I guess I am lucky to have my guinea pig, Ginger, friendly towards his friends.

According to a study conducted in the 1950s, red-eyed guinea pigs have a slightly different vision than normal guinea pigs.

This difference in their sight is due to a lack of rods within the cavies’ eyes. These rods are also known as photoreceptors, which allow the brain to process the visual cues found within their surrounding environment.

Since red-eyed guinea pigs lack these photoreceptors, they might take some time to process, understand, and examine the things in front of them.

That’s the reason why your cavies tend to bob their head or carefully look around them since their vision is limited.

However, this limited vision shouldn’t be associated with blindness. The red-eyed guinea pigs only have a slightly different visual perspective compared to their dark-eyed friends. (please read here why Guinea pig close their eyes when sleeping)

They take time to assess their surroundings with their red eyes, making them vulnerable (and cuter!).

I know- you still have many questions in your mind. Let us answer a few of those questions!

#1. Does every white guinea pig have red eyes?

No. Some white guinea pigs don’t have red eyes despite their light fur. It is because either they aren’t fully albino, or their coat is naturally white. White guinea pigs with dark-colored eyes are normal.

No. The genetic mutations only made them lack pigmentation, but it won’t affect your guinea pig’s overall health and state of being.

They could be sensitive to extreme light, but their life expectancy remains unaltered. Your cavies would live as long as normal guinea pigs would. 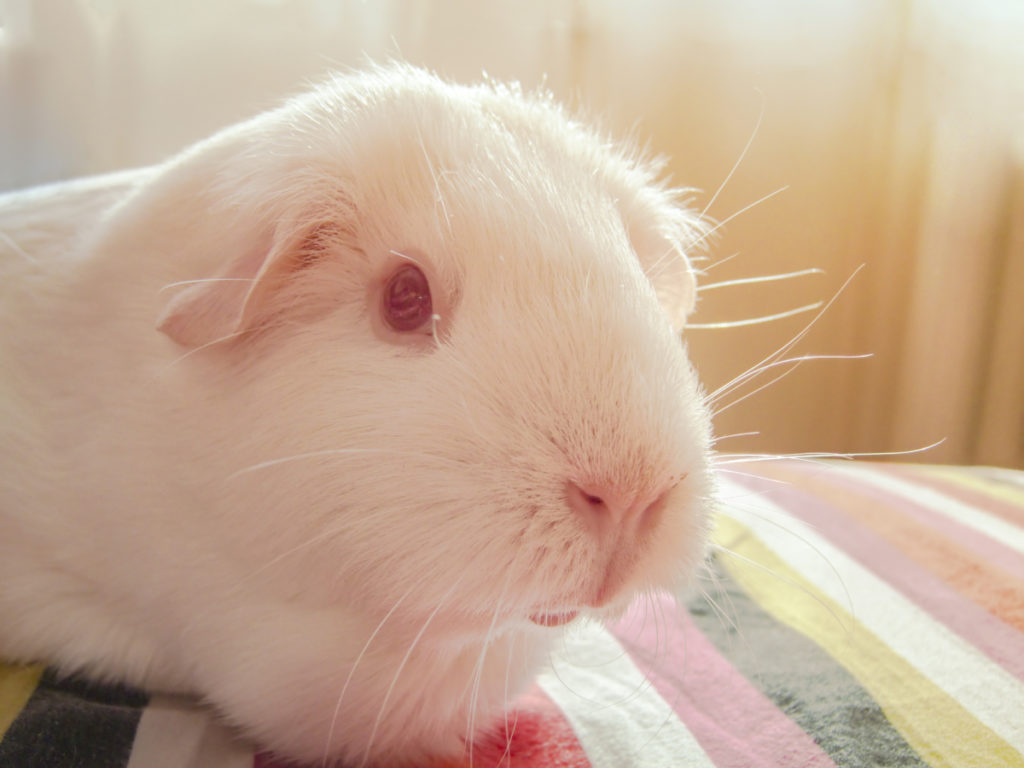 #3. What if my guinea pig’s eyes are incredibly red?

If your guinea pig’s eyes are too red, it could be a sign of a nasty infection.

If your guinea pig experiences discomfort or any pus/discharge is associated with this, approach a veterinary clinic and seek medical help immediately.

#4. How do I improve my red-eyed guinea pig’s eyesight?

Since the red-eye, encoded within their genetics, their eyesight would remain the same throughout.

However, you could maintain the optimum quality for your pet’s vision by occasionally giving vegetables/fruits rich in vitamin A.

Also, limit their exposure to intense light and keep their homes dim.

Why do guinea pigs have red eyes? It’s because of albinism and eye infections that affect the natural color of their pupils.

Seeing what’s normal and what’s not for your cavies is something that a guinea pig owner should do.

Through reading this article, you and your pet would have a clearer vision of the future. Keep safe!