You are probably wondering why do guinea pigs shake, and I know you want to see the answer. The tailless rodents shiver or vibrate when they feel fear.

However, it is not only fear which makes them shake hut also because of the cold season.

After you bathe your beloved pet, that is the most probable time in which you can see it shaking its body.

This article will teach you more about why guinea pigs shake, including more facts and guinea pig care tips.

So without any further ado, let us get right into the discussion!

So, why do guinea pigs shake?

You have to understand that guinea pigs have tons of reasons why they are shaking or shivering.

Let’s find out what these are!

As a pet owner, this one is something that you need to be aware of because the head shaking can be a sign of health issues.

The most common reason we look at here is an ear infection, which can go severe over time.

Let me tell you a story about my Peruvian guinea pig named Ginger.

I saw some weird behavior in Ginger that made me think that there is something wrong with him. It was already one whole day that did not bite his food and always lost balance.

Furthermore, it was never her thing to roll on the ground (but that is what she is doing!).

I have made up my mind that I will see a veterinarian first thing in the morning because I know that something is not right.

After the check-up, the local vet told me that Ginger has an ear infection, and that was why he had weird behaviors like shaking its head.

The typical dominance behavior for a cavy is vibrating or shaking its bum.

This behavior is also called by many rumble strutting, in which guinea pigs do movements that come with a rumbling sound.

It is a thing for cavies, especially if they are doing a mating call or showing their dominance over another guinea pig.

This behavior is familiar to them but be alarmed if these guinea pigs get to a severe rumble or fight.

#3. Guinea pigs shake when you pet them

There are only two probable reasons why a cavy is shivering or shaking when you try to pet them; they love it or hate it.

It is not only that shake but also you can hear it make a purring noise.

And I guess that is the one tough thing in distinguishing if your cavy loves you petting it or not.

Sometimes, a guinea pig can get irritated, so you might as well observe the first but loves a cuddle or not since not all guinea pigs share the same preference.

#4. Guinea pigs shake after a bath

As we have discussed earlier, a cavy tends to shiver because it feels cold after a bathing session (like most of them).

It is the main reason you should not leave your pet all wet and damp because it may get sick due to the cold!

Usually, cavies do not need to be bathed quite often, which is why you have to dry them out after a chilly encounter with water instantly.

You do not need to worry if your tailless rodent is shivering after a bath because it is entirely normal for them.

#5. Guinea pigs shake when they’re afraid, cold, or suffering from a disease

It could be due to cold, anxiety, cold, and even fear.

The one thing that you must be alarmed about is that the shaking of your cavy is due to a skin parasite, which is called the guinea pig mange.

This harmful scenario can lead your pet to shake, feel pain, and twitch all the time!

More so, you can notice that during thunderstorms, your cavy will tend to shiver (because it is afraid of it).

#6. Cavies shaking due to sickness

One of the common reasons for shaking guinea pigs is that it is not feeling well or sick.

Maybe your cavy is in pain or just because of the cold weather outside.

There should be symptoms of it being sick since these tailless rodents are like humans that give out clues whenever they are not feeling well.

The constant shivering may cause a health issue, so it would be best that you do not ignore it.

The following are specific reasons for the shaking:

How To Calm Down A Guinea Pig

As we all know, fear is one of the most common reasons for a cavy shaking or vibrating.

Being a pet owner, you have to take specific steps to calm it down because you surely do not want your pet to be stressed.

The steps that you should make are:

Let your guinea pig have a good sniff at your hand for a tiny bit of a second to let him know that you are with it.

Talk to your pet with a gentle and soothing voice so that it won’t increase the fear, and you won’t startle your cavy.

Step #3. Put it closer to your chest and cuddle it.

Since guinea pigs do not mind being picked up, you might as well see it as an advantage to pet it when it is scared.

We are all aware that guinea pigs cannot talk like us humans (because that would surely be creepy).

Instead, these tailless rodents express what they feel through the use of body language.

As an owner, you need to be familiar with these behaviors to understand what your pet is trying to say immediately.

If you are keen on observing its everyday behavior, you can distinguish what is expected and not.

Moreover, you can spot tiny changes in its movements, which can also be a sign of something important, like an illness or infection.

There will be certain cases that will alarm you, but a simple shake can only mean happiness.

They might also tremble due to fear, so be sure that you have kept in mind that tip that we discussed on calming down a cavy.

You need to be keen on its behavior because if there comes a time for medical help, you can immediately identify the symptoms before it’s too late.

May you have learned enough knowledge in this blog post, and thanks for reading! 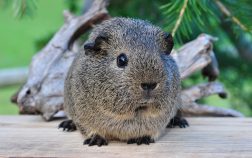