Why does my cat meow when I sneeze? A human sneeze is loud and often startling for a kitty. This is the reason why your feline will meow loudly whenever you let out a loud ‘achoo!’. Some cats will have pinned ears, wide eyes, and a shocked reaction. This is pretty normal, especially if your cat rarely hears such a sound. Other cats would even attack their owners who just sniffled.

Reasons why cats meow when we sneeze

Many of us think that a meow after a sneeze is a cat’s way of saying ‘bless you’. The truth is that when you sneeze, you make a sudden and loud noise. This will confuse a cat. If you’re wondering why your cat has a weird reaction each time you sneeze, you should consider the following:

If you have a loud and aggressive sneeze, your cat will be shocked by the sudden sound. It will confuse the kitty since the behavior isn’t typical to you. It will meow as a way of asking, ‘What just happened? Are you okay?’.

Cats that are attuned to their owners’ habits and nuances are more likely to meow like this. If your cat meows out of worry, it’s best to give the kitty a pet to let it know that you’re fine.

Cats have a loud sense of hearing, so if you sneeze massively right next to it, the kitty would be scared. Many cats will jump out of surprise and fright due to the unanticipated noise. It may even hide out of fear.

The meow, cry, or chatter is your cat’s way of expressing its fear of your sneeze. You should calm your cat and assure the kitty that everything is okay.

My kitten Watson is a cat of mimicry. He would often meow after we talk as if he’s trying to repeat the sound. He’s quite a chatty cat, so when my wife sneezed loudly, we had a nice chuckle when he meowed back.

This is because Watson thinks my wife is communicating with him through the sound of a sneeze. And as a cat who loves being involved in the household, he feels obliged to answer.

4. Your cat is annoyed by your sneeze.

Each cat is different, and so is its reaction to a sneeze. Some cats will appear grumpy and annoyed by the noise. It’s possible that the loud sound startled the kitty, and it doesn’t sit well on their sensitive ears.

You will hear a grunt-like meow as a response. This happens when a resting kitty got bothered by your uninhibited sneeze. As much as possible, cover your mouth and nose to muffle the sound. Besides, this is the proper sneeze etiquette.

Another explanation is that your sneeze probably sounded like a hiss. Your cat will think that you are angry towards him, thus the meow or cry after.

Most cats don’t perceive sneeze this way, but a friend of mine said that his cat cries whenever he sneezes. I think this is common for affectionate cats who are hypersensitive to how their owners treat them.

6. Your sneeze reminds the cat of earlier trauma.

While this is rare, some rescue cats might be reminded of a previous trauma due to the sound of your sneeze. In response, your cat may meow and cry due to fear.

Most rescue cats will be jumpy at first. With proper socialization and adjustment, the scared kitty will soon acclimate to your home, and even with your loud sneeze.

If you just bought a rescue cat home, try to make its environment as calm a possible.

Why does my cat cackle when I sneeze?

Like humans, cats have different reactions to various sounds. Others will meow when you sneeze, while some may produce a weird, cackling sound. This can be an expression of disgust over the sound of your sneeze. It’s also possible that the cackle is your cat’s effort to mimic the sniffling sound.

Another possibility is that your cat sees or smells the tiny droplets that came from your mouth and nose. Your kitty may perceive it as a prey trace, which may confuse their prey drive. And if you’re on heavy medication for your sickness, your cat may find the drug smell on your breath off-putting.

Why does my cat meow at me I cough?

Like a sneeze, a couch can be startling for a cat, especially if you did so in the middle of a quiet interaction. The reason for this is similar to why cats meow when you sneeze. It can be anything from worry, fright, frustration, or curiosity. Although your cat can’t talk, it’s trying to find ways to communicate verbally.

Overall, this behavior isn’t something to be worried about. It’s normal for most domesticated pets. Unless your cat is attacking and biting every time you cough, I don’t see any problem here.

Should I meow back at my cat?

I will admit, I’m guilty about this. I always meow back to Watson whenever he cackles at me when I sneeze. But can cats really understand our meows?

There’s no study proving that cats can understand human meowing. Still, your kitty will be happy to receive attention. Although the cat may not understand the message, it will be pleased with your effort to communicate.

Experts suggest that you should focus on the tone of the meow. Always meow softly to avoid frightening the feline.

Did you know that cats learned to meow just for humans? They don’t meow at each other since they use the sense of smell to communicate. The length and tone of the meow will denote a specific message.

Can my cat catch my cold?

Yes, according to the Ontario Veterinary College, cats may contract their owners’ colds, depending on the virus strain causing it. Still, this is a rare occurrence. But to be sure, it’s best to practice sneezing etiquette when your kitty is around to prevent the spread of the virus.

Just because you have colds doesn’t mean your cat will get it. Also, just because your cat is sneezing doesn’t always mean it contracted a cold. You should bring the kitty to the vet for a proper diagnosis. It could be anywhere from mild respiratory distress or a serious health problem.

Why does my cat meow when I sneeze? Your kitty might be startled, scared, shocked, or intrigued by what just happened. Each cat will have a different reaction, so it’s pretty normal and shouldn’t cause concern. It’s just one of those funny and weird experiences you will have with your beloved cat. 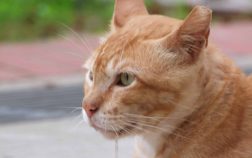 Why is my cat drooling all of a sudden? Cat drooling can be a sign that your pet has dental problems. Mouth ulcers, lesions, … Read More

Cats can have pretty weird habits – something that I’ve proven over the years. Kitties will scratch, make biscuits, sleep in weird places, and … Read More 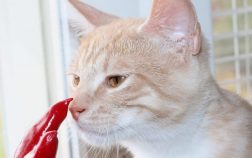 Since cats have heightened senses, we can’t help but ask, can cats taste spicy food? The answer is no, cats don’t really taste spicy … Read More