Home
Cats
Can Cats Drink Rice Milk? What You Need to Know

Can cats drink rice milk? You probably came across rice milk once and wonder if it will be safe for your kitty. The answer is that vets don’t recommend it. A single sip of rice milk won’t hurt your cat, but it doesn’t have any nutrients that will be useful for your pet. In this post, I will discuss more about rice milk and if it’s suitable for your kitty.

Is it okay to give rice milk to my cat?

To know whether rice milk is suitable for your cat, you have to understand what’s on it first. It’s plant-based milk made by pressing rice through a mill to harvest its extracts. Such extract will be mixed with syrup and other sweeteners to make it more appealing to the taste.

So is rice milk safe for cats? As for safety, we can say yes, but it’s not necessary for your cat’s diet. Cats don’t usually seek milk and other plant-based food sources.

While rice milk will give some benefits, it shouldn’t be considered a main source of nourishment. Also, commercially formulated rice milk may have artificial ingredients and preservatives that mess with your cat’s stomach.

Remember that rice milk is made for humans and not for cats. If your kitty happens to have a sensitivity to rice milk, it will experience diarrhea, vomiting, and abdominal pain.

Sure thing, kittens that have been left behind by its mother need milk, but not one made of rice. Replacement milk formulas must be made specifically for kittens. Rice milk doesn’t have the nutrition that kittens need to grow healthy. Worse, it will only cause diarrhea that will compromise the kitty’s life.

Many pet owners are misled that rice milk is safe for cats since it’s lactose-free. While it’s true, rice milk is mixed with fillers and other ingredients to make it appealing to humans.

As obligate carnivores, cats’ digestive system isn’t programmed to digest plant-based food. There’s a possibility that your cat may experience adverse side effects if it drinks rice milk often.

If you want to give your cat a dose of milk, you should use one made for cats.

Oat milk is made of oats that are soaked in water and blended to produce a milk-like consistency. It’s rich in fiber and nutrients that are beneficial for humans. But is it the same with your cats?

It depends on the formula of the oat milk. A small cup of oat milk once in a while won’t hurt a cat. However, if the oat milk is mixed with artificial ingredients, it may stir a problem with your kitty’s digestion.

You should know that oat is a type of cereal. Many cats and dogs tend to develop allergies or intolerances to certain types of grains. In rare cases, cats will have a problem digesting oats.

However, if your cat isn’t sensitive to oat milk, you can give it a treat sometimes. Still, you shouldn’t make it a regular thing. Also, look for all-natural oat milk with no added preservatives or coloring.

Similar to how you’ll give rice milk, start with a single teaspoon of oat milk then observe your cat. If your kitty doesn’t show any adverse reactions, you can give some more but don’t’ over-indulge.

Coconut milk is lactose-free, so many cat owners think it can be an alternative to rice milk. A small amount of coconut milk won’t hurt. However, you should keep in mind that this milk is high in fats and oils that some cats may find hard to digest.

What about coconut water? A small amount should be fine, but note that coconut water is rich in potassium, which can be too much for felines.

If your cat drinks too much coconut water repeatedly, it may experience hyperkalemia or excessive mineral intake that will make the blood acidic. It’s safe to assume that it will be the same with coconut milk.

If you’re worried about giving your cat some rich milk, you should know that evaporated milk isn’t an alternative. Cow’s milk used in evaporated milk contains lactose, something that cats can’t digest. Your cat will end up with diarrhea.

There’s no need to give grown cat milk since it’s not part of their diet. If you want to treat your kitty for some nice drink, you can distill catnip on warm water. A small amount of green tea is also a great choice.

Humans drink so much milk, so it’s fair enough that we wonder if it suits cats, too. As for almond milk, it’s a big no. Giving almond milk to your cat means excess calories and possible diarrhea. Take note that a single cup of almond milk can have as much as 100 calories. Even for humans, that’s too much for a drink.

Aside from that, commercially purchased almond milk is sweetened and processed. It can cause tooth decay among cats if given regularly. A sip or two is fine, but don’t give almond milk or rice milk to your cat as a treat.

Of all the milk that you can give your cat, you have to take the most caution with soy milk. Sure, it’s lactose-free, but it’s also made of soy.

Soy is one of the most notorious allergens among cats and dogs. If your kitty has sensitivities to soy, it’s a no-brainer that soy milk is out of the table. Like almond and rice milk, soy milk can have too many calories that will increase your cat’s risk of becoming obese.

Is milk bad for cats?

Milk isn’t necessarily bad for cats. Some milk types aren’t toxic to cats, but it just happens that it’s not part of their diet. An adult cat should be eating a meat-based diet with minimal plant components.

As much as milk is a good source of protein, it can also mess with your cat’s tummy. Also, milk doesn’t supply a cat’s needed nutrients since they are carnivores.

Even if your cat seems to love milk, it’s not a good idea to let them drink too much. Usually, cats that gravitate toward milk has an upset stomach. Milk is high in fat, and if it’s plant-based, cats will think that it can help ease their tummy problems even if the effects are totally different.

Can cats drink rice milk? In general, cats are not supposed to drink any type of milk. It’s not part of their diet, and it may only cause diarrhea. In the end, it’s better to be safe than sorry. 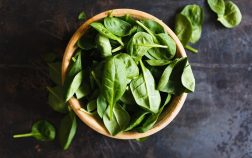 Can cats eat spinach? Yes! Spinach is rich in minerals and vitamins that are beneficial for your cat. Still, moderation is necessary to prevent … Read More 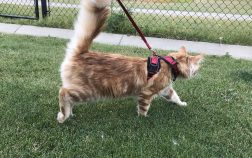 Dogs are not the only domesticated pets that can walk on a leash; cats can, too! However, the approach on how to leash train … Read More 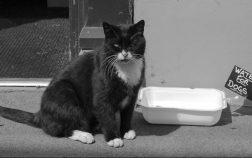 How long can a cat go without water? The truth is that cats can survive longer without food than without water. Like humans, hydration … Read More