To tell you, no one is sure where the name guinea pig originated.

Some people think that guinea pigs get their name from the squealing sound which they make.

I have a pet named Ginger, but why did I choose that name?

Well, because Ginger always tries to sneak for that root when she was still a baby. She was so cute, and I couldn’t help but laugh every time I caught her. Thankfully, she hasn’t eaten one and stops after she sniffed it.

In this blog post, we will further explain many amazing facts about guinea pigs, and the main focus is where the name of these adorable rodents came from.

So, without any more delays, let us get right into the discussion!

Where Do Guinea Pigs Get Their Name?

In scientific explanations, guinea pigs are indeed not from the pig family, as to which their name implies.

They came from the Caviidae family that includes mountain cavies and other South American rodents.

We’re clear to the fact that they are not from pigs that goes “oink-oink”.

So now that you know that guinea pigs are not pigs, why are they called like that?

The answer is simple.

These cute rodents make some squeaking sound that resembles piglets, so people added pigs into their name.

Why Are They Called Cavy Or Cavies?

If you are new to being a pet owner, you might wonder why I keep calling guinea pigs cavies, am I right?

Well, the explanation for that is accessible.

The first thing you need to know is that the taxonomic name for these tailless rodents is Cavia porcellus.

Does it ring a bell now? To further explain, cavy and its plural form, which is cavies, are derived from the genus Cavia, so guinea pigs have a shorter name.

It is nice that guinea pigs can be called different names because it’ll be redundant to call them guinea pigs throughout this blog post.

There are many things that you need to know about cavies so that you can have enough knowledge about their nature and characteristics.

We’ll answer your question: how did guinea pigs get their name?

In this part, we are going to discuss some of them. Let’s go!

Guinea pigs originally came from the Andes Mountains, which is located in Peru.

These animals are not pigs, but they are rodents.

The part of their name, which is the pig, is believed that the squeaking sound that cavies make for the noise resembles the baby piglets.

For the guinea portion, it is believed that when sailors brought these rodents to South America, they sold it for a guinea, which is a term for an English coin.

Guinea pigs are adorable because every time their owner enters the room, they would make squeaking sounds.

Ginger, my cavy, would always do that as well.

In his body language, he is happy whenever she sees me, and I am also delighted about it.

Cavies are social animals that want to live in a small group.

Unlike other pets like rabbits, guinea pigs can make Vitamin C for their body.

Some of the pets are prohibited from overeating oranges, but guinea pigs indeed enjoy large amounts.

These cute rodents’ teeth grow continuously as they also grow, that is why they need something to chew or gnaw on every time.

This action will let them trim their teeth because it will be too bad for them to have 20 very long ones (and they might look scary, though).

It is for this reason that I invest in good quality chew toys for guinea pigs. I hope you do too, just like what I do for my Ginger.

#6. What are the varieties?

There are three breeds that you can reasonably identify for guinea pigs.

Namely, these are the Abyssinian, the Smooth-Coated, and the Peruvian.

Cavies are crepuscular, which means that they are mostly active during dusk and dawn.

If they are awake, their time is almost spent eating or investigating their cage (super cute!). Oh, they’re like vampires, huh!

Guinea pigs are herbivores, which means that they feed on plants and not on other animals.

They also love to eat pellets and munch on hay. Vegetables and fruits are also their favorite foods because of the texture when they chew it.

The Appearance Of A Guinea Pig

Guinea pigs are small animals which only weighs about 700 to 1100 grams as an adult.

Similar to other rodents, their teeth grow longer and longer as they age.

Their mouth is shaped like a triangle and has twenty small teeth to chew their food. A cavy’s ears are small and are in a petal shape.

According to trusted sources, there are thirteen breeds for guinea pigs, and three are the most popular ones.

These breeds are characterized by either their hair texture, hair color, or the pelage’s color patterns.

I might add this part because there is also a difference between the male and female guinea pigs’ names.

Males are often called boars, and the females are sows. The baby cavies are known to be called pups (which is another confusion).

Sows are pregnant for about 59 to 72 days before giving birth for an average of three of four babies.

In extreme cases, sows can even give birth to thirteen pups in total in one pregnancy.

These pups need nutrition, but as a fun fact, they can immediately eat solid foods!

These cute babies will be matured for about two to three months.

Guinea pigs can live longer than other types of rodents, which makes it an excellent reason for you to get one.

They can typically live for five to seven years, which is why it is an ideal house pet for you.

How did guinea pigs get their name?

In conclusion, guinea pigs are named because of an old English coin and their sound.

Some owners name them after their favorite food, and some name them with cute stuff that they can think upon. Many factors can affect that decision, but surely, an owner will know best for her beloved cavy.

Being called a cavy or cavies makes sense that it is derived from its genus Cavia.

This blog post is one of the most important things you must know if you own a guinea pig.

The first time I had Ginger, I immediately researched why they are called guinea pigs because it bothered me. Thinking that they are not pigs, it made me curious, which is why I was once also in your shoes searching for an answer.

Thank you very much for reading, and may your cavy grow into a healthy and energetic one! 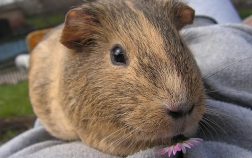 Why do guinea pigs bite? Simple, it’s because of their instinct. It is a simple defense mechanism of an animal to protect themselves from … Read More 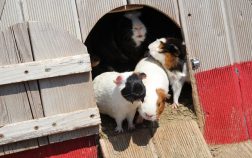 Can guinea pigs eat cherries? The question is answered in the affirmative, although it has some limitations. Before we answer that in detail, let’s … Read More

When are guinea pigs full grown? Most people think that baby guinea pigs do not grow up and will just remain a hamster’s size. … Read More