The question we are going to discuss in this article is: what does it mean when guinea pigs chatter their teeth? At first, guinea pigs’ noises can get very alarming, especially when you do not know the reasons why they make those sounds.

One of the best reasons to explain this behavior is when they are upset or unhappy about something. 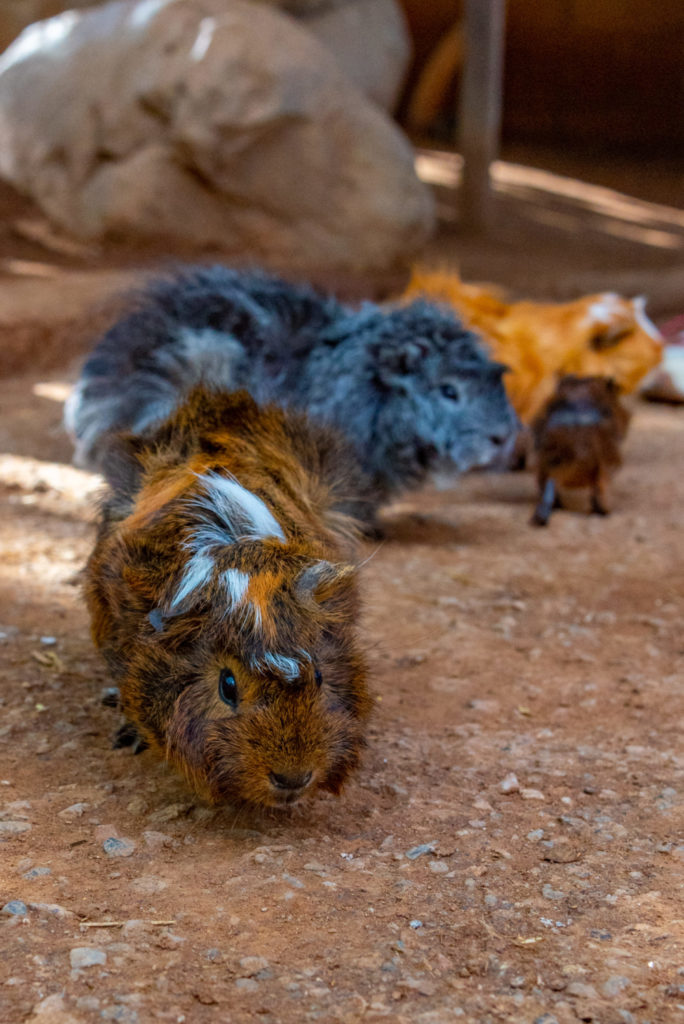 Maybe, the cavy might have felt threatened, or there is something that is making it feel angry.

Particularly, when a guinea pig is sick, the others will see its weakness as an opportunity to start a fight. As such, you have to be vigilant and find out why they are chattering their teeth.

And in case you notice them chattering their teeth, it would be best not to avoid picking them up immediately.

Instead, you have to wait until they have already settled down before doing so.

What Is Teeth Chattering?

If you haven’t seen your guinea pig chatter its teeth yet, this is when they release a quick streak of squeaks.

It generally means that they are agitated, unhappy, or angry at a certain situation.

Furthermore, chattering will most likely occur as you introduce two guinea pigs to each other, especially when this is taking place inside a cage. 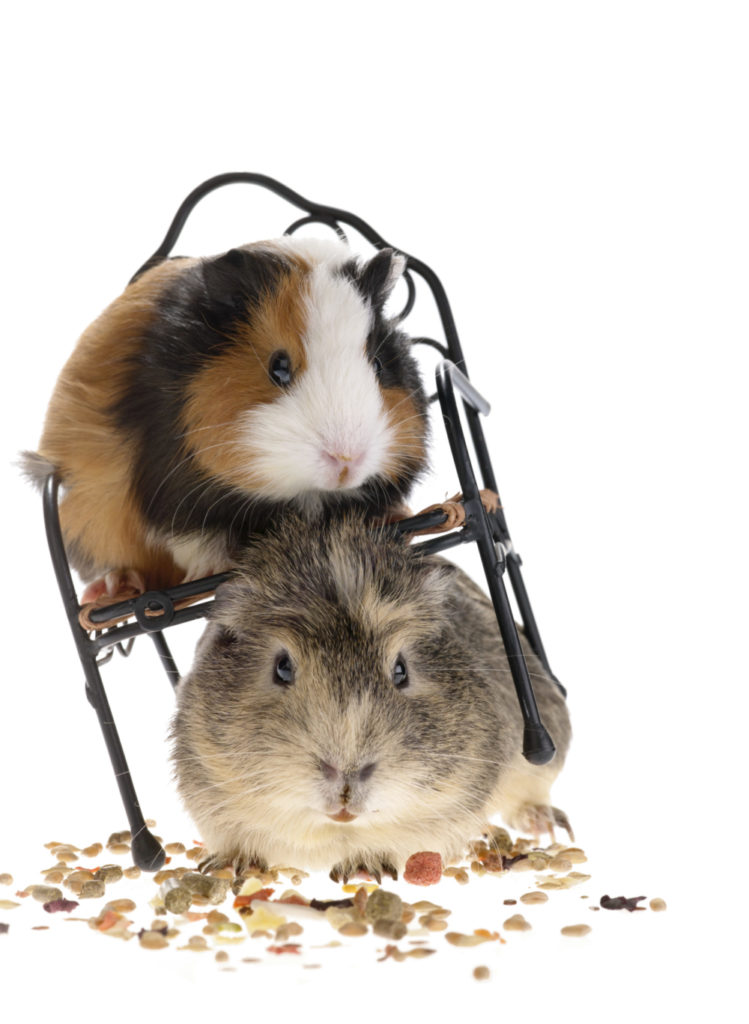 They do this to warn one another not to impede each other’s personal space or territory.

In such a case, you have to isolate the two of them before a fight starts.

After they have calmed down, you can start reintroducing them slowly. Continue doing this; eventually, the chattering will just go away.

However, if you intend on raising two male guinea pigs, chattering will be inevitable. That is because they are trying to find out who among them can dominate the cage.

As the pet owner, you have to try your best to keep the two Guinea pigs from fighting.

Sooner or later, they will learn to acknowledge the existence of one another.

What does it mean when guinea pigs chatter their teeth?

If your pet chatters or grinds its teeth, then it is probably expressing its annoyance.

Most often than not, it serves as the final warning before a fight starts between guinea pigs. 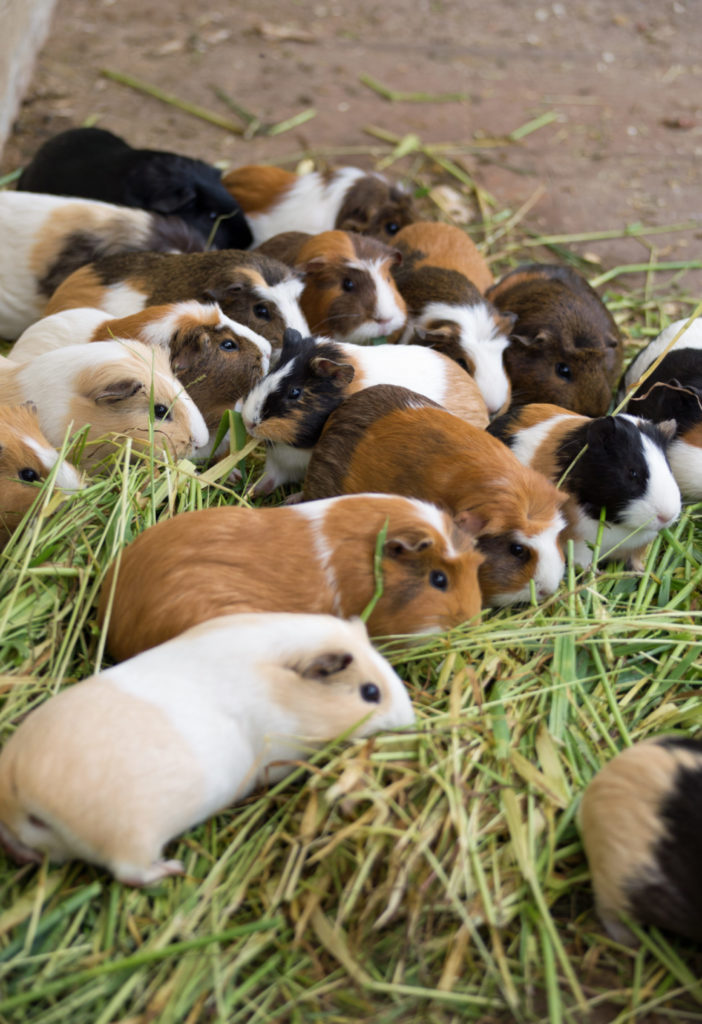 Therefore, you have to be attentive whenever you hear a distinctive noise coming from their cage, especially when you have introduced a new member to the group fairly recently.

This is usually associated with their attempts to establish a proper order among them.

Remember, even the long-term relationship among guinea pigs can be broken as they age or if one of them becomes ill.

So if you notice one of them is ill, you should not wait before the chattering happens. It is best to isolate the ill one from the rest of them.

Other Sounds Of Guinea Pigs That You Should Know

Since guinea pigs cannot talk, the least that they could do is to make distinctive noises to express themselves.

For example, when they squeak, it often means that they are happy or content. They also do this if they want something, primarily food.

But the meaning is entirely different if their squeak is loud and high-pitched. 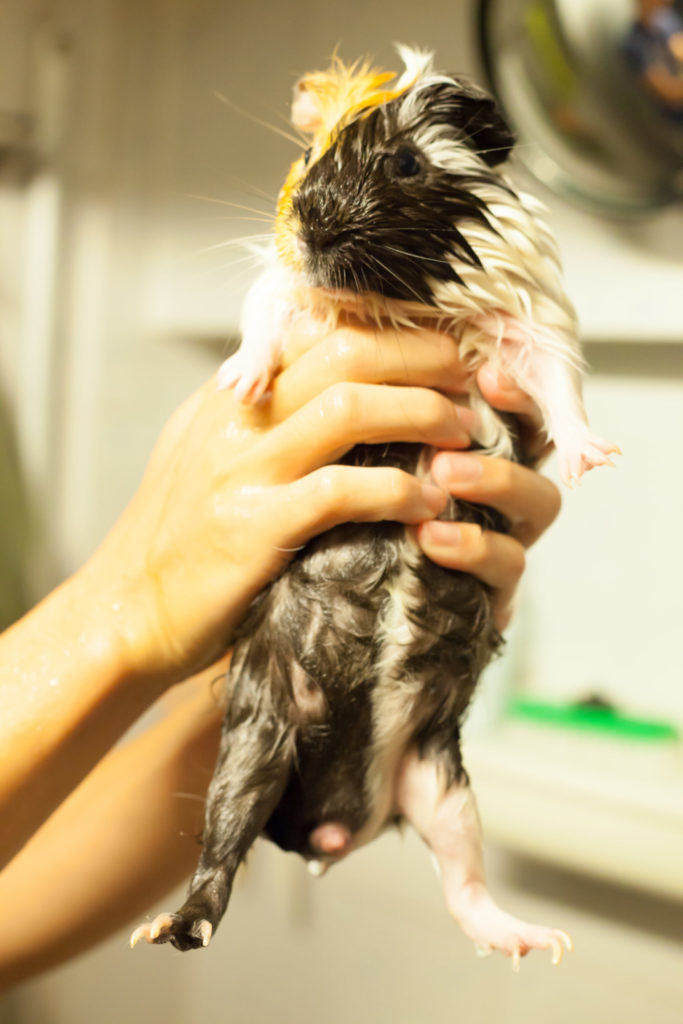 Commonly, it can be due to pain or if they are frightened about something. This noise is how they respond to a threat, or sometimes, it might be because you have done something that they do not like.

Here’s what I am trying to say here: Pet owners need to know and understand their pets through the noises and the sounds that they make.

That is because this is their only way of communicating with us.

Through this, you will know if your cavy is hungry, stressed, contended, or excited.

For that reason, I decided to include the most common sounds or gestures that guinea pigs make and the possible reason behind this.

The whining sound of a guinea pig is somewhat similar to a moan that is high-pitched. It usually makes this sound when it is being bothered or disturbed.

For example, if a guinea pig is taking his nap and a fellow cavy is interrupting him, you will probably hear this sound coming from him.

If this happens, I suggest that you just step away from the cage and let him be. The more you insist on getting close to him, the louder his whining sound would be.

Believe me; it is best to just step away. I know because this happened to Thumper and me several times.

Before, I used to pet him or carry him. I even tried to bribe him with delicious treats for guinea pigs.

But he won’t stop whining. But later on, I learned that it is better to ignore him and let him alone. And it works every time. He will just quiet down after some time.

Usually, purring occurs when the cavy is making a low and constant sound. This is associated with their happiness and contentment.

Try petting your pet, and you will most likely hear this sound coming from him.

But, they also vocalize this noise when they feel threatened or when they hear a startling noise. The only difference is that it comes in short spurts.

The rumbling sound of guinea pigs is somewhat similar to the purring sound.

One key difference is that it comes in a lower pitch and with a vibrating effect.

Male guinea pigs often use this particular sound when they are enticing the female cavy to mate.

At some point, this is his mating call.

He will start to walk around the female guinea pig in a random pattern while wiggling his hips.

The female might also rumble to signal the male that she is ready to mate, especially when the male isn’t trying to mate with her.

When guinea pigs are hungry, they might make a wheeking sound.

Do not be surprised if they start to wheek exactly when you usually serve them their food. Guinea pigs get familiar with the routine and when they feel its time for food, they may try to communicate it to you through wheeking. They exclusively direct this sound towards humans.

According to a study, guinea pigs do not wheek in the wild. Perhaps, this is because no humans are feeding them treats and pellets.

Just like most animals, guinea pigs make a growling sound of distress when they are being threatened. It can also occur when there is a sudden change in the environment.

In such a case, very gentle petting can calm her down. After a while, you will notice that a growl might turn into a delighted purr.

What does it mean when guinea pigs chatter their teeth? Teeth chattering is an indication of a possibly serious problem.

Probably, it’s a natural response to pain; say, for instance, a dental problem resulting in eating difficulty or an infection.

Not only that, they behave in such a way to show their annoyance. In this case, there might be a problem between cage mates.

So, you have to determine what the source of this occurrence is so you can take action as much as possible.

I hope the information from this article will help you communicate with your guinea pig better.