When do guinea pigs sleep? Most rodents, such as hamsters and rats are considered nocturnal. That means they are sleeping during the day.

Maybe this is why most people assume that guinea pigs are also nocturnal. However, they aren’t.

My pet, Ginger, literally sleeps anytime he wants, in a sense that you cannot predict when he will decide to sleep. Also, he would sleep for very short intervals.

Here’s what you should take note of:

Guinea pigs do not have a sleeping pattern.

Unlike other prey animals that tend to sleep when the nearby predators are out, guinea pigs would simply sleep anytime they want. Not primarily at night or day only.

So they are more comparable to cats that would take naps during the day but will still sleep in the evening. 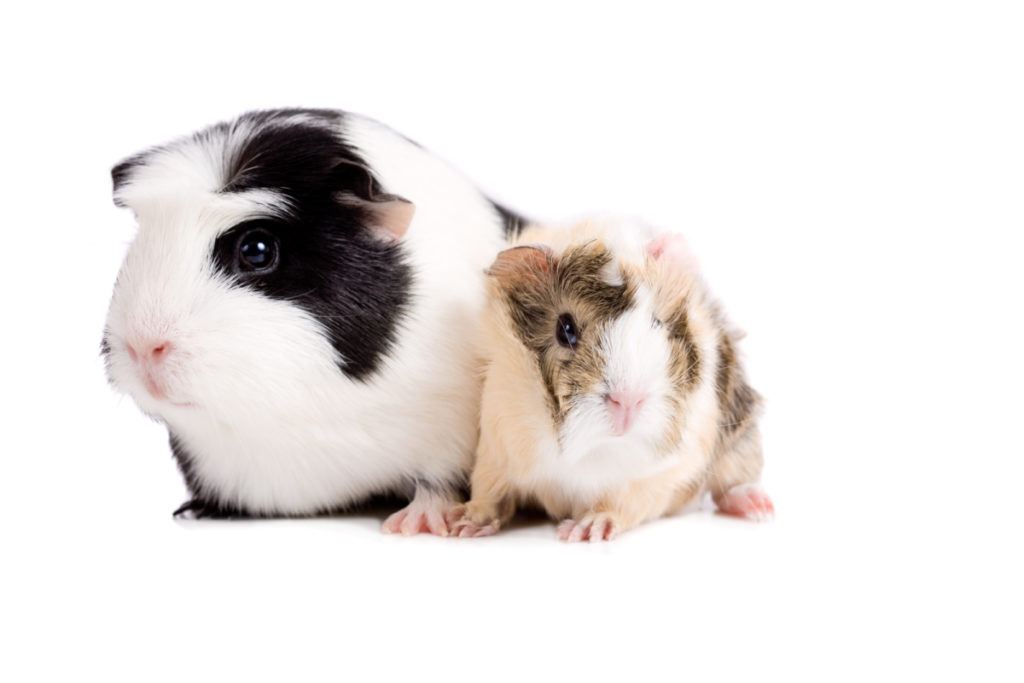 However, this kind of sleeping behavior is only common among carnivores since they sit on top of the food chain. They need not worry about carnivores so they can freely sleep during the day.

But our little guinea pigs are way far from the top; they are even easy prey to different predators such as owls, snakes, and wolves.

So if you are curious about the sleeping habits of guinea pigs, keep on reading!

When do guinea pigs sleep?

The sleeping behavior of animals can vary depending on the length of their domestication.

It has been long enough since the guinea pigs have been domesticated, so it has altered their natural characteristics. This includes the sleeping behavior that they have changed to adapt to human life.

But they still have kept some of their natural protective mechanisms just like, for example, freezing when they are in danger of sleeping while keeping their eyes open. This article answers your question Do Guinea pig close their eyes when sleeping? 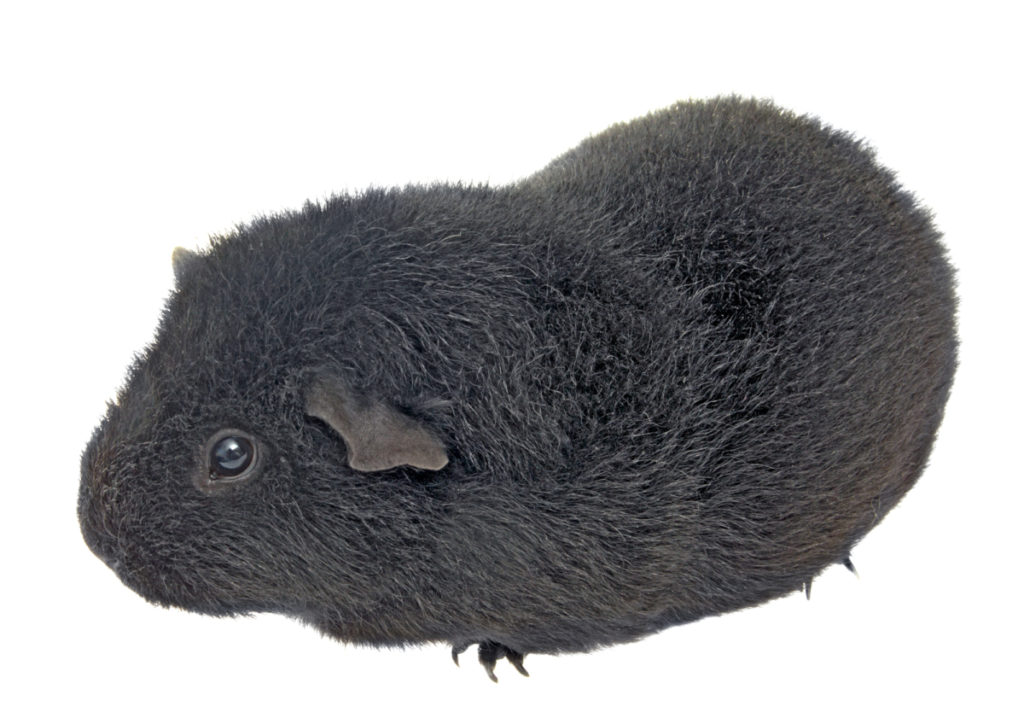 There are also other recurring patterns that most pet owners have observed.

For instance, guinea pigs prefer to stay in dark places. This is also why most people thought that they are nocturnal. But this is not true, although they can see clearly even in the dark.

Considering the food chain order, guinea pigs may not sleep in the dark since they are easy prey to several animals. This is also the reason why they have a clear vision.

But on the contrary, some claim that they are afraid of the dark too.

Every once in a while, you will see your guinea pigs standing still. In this case, they are most likely sleeping.

Yes, you read that right! Guinea pigs do sleep when they’re standing still.

This is common for them to sleep in this position, but they might as well lie with their heads down. Or they can also be lying on their sides or burrow in their bedding if they decide to take a nap.

But if they feel completely safe, they might choose to sleep with their eyes closed. So if your pet sleeps like this, it only means that he trusts your presence. You will notice that as you build a stronger bond with them. They will start trusting you.

I remember Ginger used to sleep with his eyes open in his first months of staying with me. But later on, he would automatically snooze after I gave him a decent amount of hay.

#1. How Long Do Guinea Pigs Sleep?

Guinea pigs sleep in short intervals. They need approximately a total of four hours of sleep each day.

However, this differs for every guinea pig. Some might sleep less or more depending on how they adjust their daily routine.

Each sleeping interval can range from a few seconds up to ten minutes. 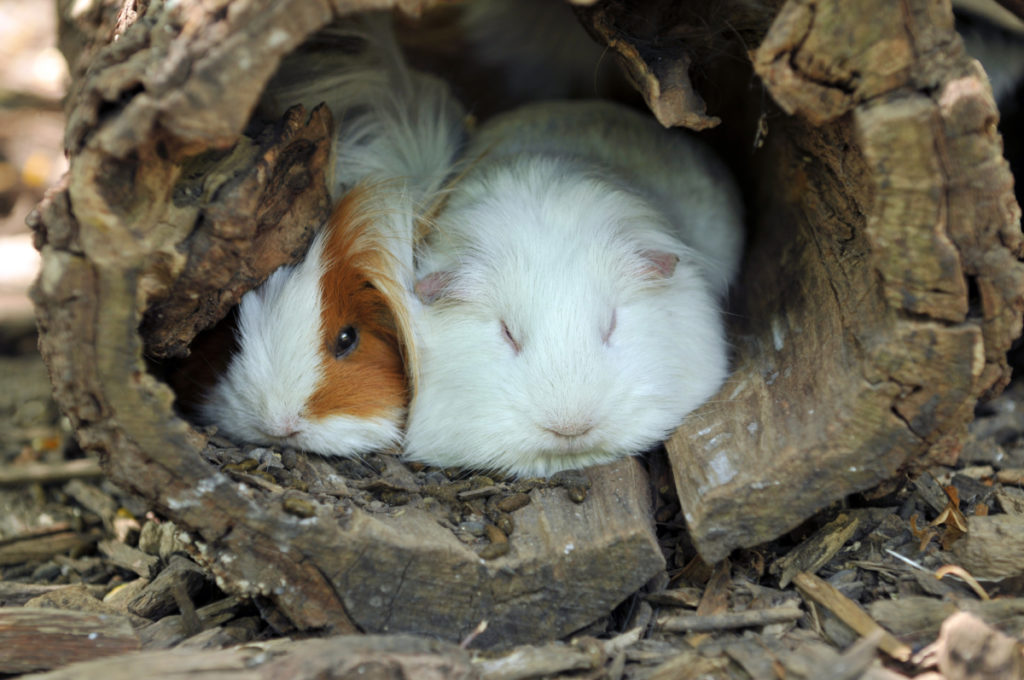 Longer sleeping intervals, on the other hand, can reach up to 30 minutes. Although this kind of sleeping interval is very rare among guinea pigs, it usually happens if they are extremely sleepy or relaxed. Learning how to entertain guinea pigs can help you keep your guinea pig relaxed.

Furthermore, younger guinea pigs also tend to sleep for shorter intervals as compared to older ones.

That is because as they get older, guinea pigs would spend more time sleeping during the day.

#2. Can Guinea Pigs’ Diet Cause Sleepiness?

Sleepy guinea pigs are not only due to exhaustion. You may try looking closely into their diet.

Lethargy is often associated with vitamin C deficiency. This can further cause joint and muscle pain, and eventually, it can lead to malaise and inactivity.

Aside from that, the age of the food also tends to affect its vitamin content as well.

As such, it is essential to choose good quality foods as well as store them properly. Your vet can also help you with this.

You can get your pet checked whether or not he is experiencing vitamin C deficiency.

In addition, it is also suggested that you offer high-quality food, treats, and supplements as these can help treat the problem.

Also, try having cantaloupes, kiwi, mangoes, strawberries, and so on; all of these are rich in vitamin C!

You can read more about the health benefits of mangos and   Strawberries for guinea pigs in these articles.

#3. What Is The Good Temperature Range For Sleeping Guinea Pigs?

That is because the metabolic activity of guinea pigs and animals in general changes when they sleep.

When they are awake, their circulatory and digestive systems consume most of their energy.

But when they sleep, the systems that are responsible for repair and growth take the lead. This means that the guinea pigs can easily get a respiratory infection or cold when they are sleeping. 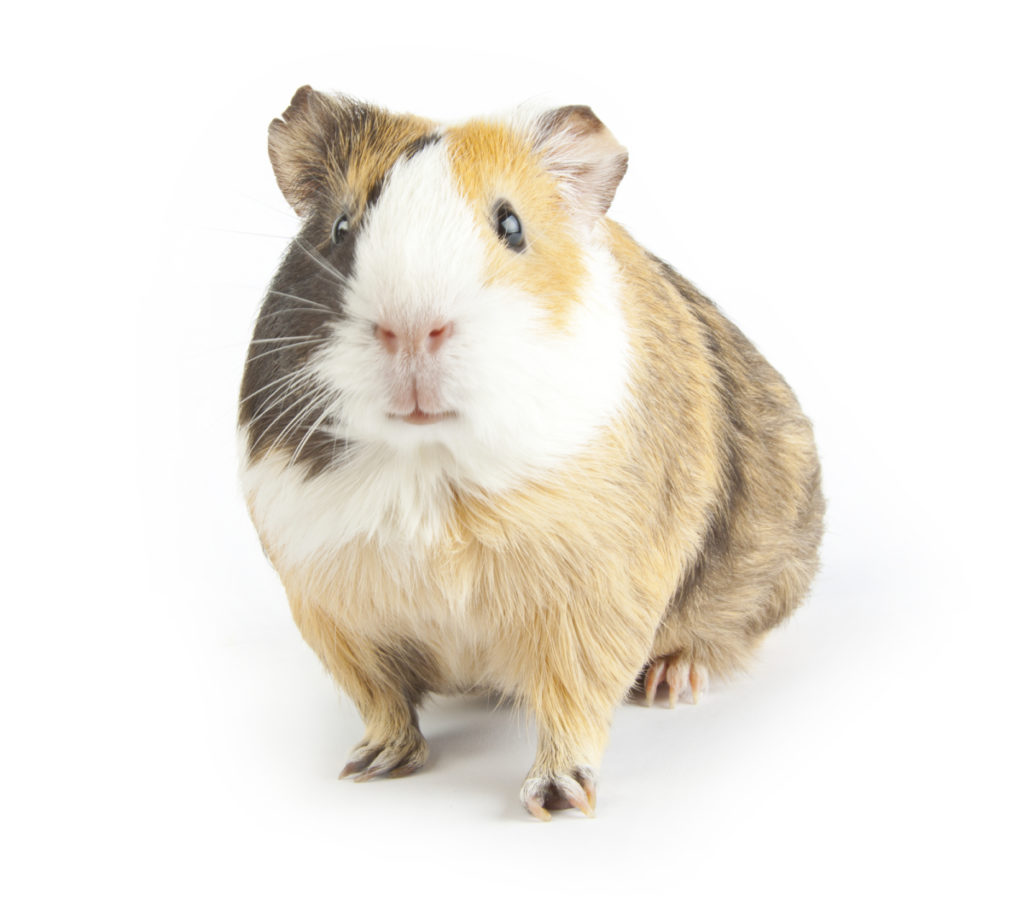 As such, the temperature required when they are sleeping needs to be a bit higher than when they are awake. Learn different ways to  keep guinea pig warm to maintain the optimal health of your lovely pet.

With that being said, most authorities advise pet owners to be precautious.

Avoid having your little furry friend sleeping in a temperature ranging from 65 up to 70 degrees Fahrenheit.

Even though guinea pigs can handle this when they are awake, they can be prone to different respiratory problems if they sleep at the same temperature level.

In my case, I always ensure that Ginger will sleep in a comfortable environment with temperatures ranging from 75 degrees Fahrenheit or higher.

I made sure that with Ginger that he will have a large enough cage with a hideaway where he can sleep in. Such a hideaway has better insulation to ensure that he won’t catch a cold.

His cage is also situated somewhere he can experience a regular night and daylight cycle. His area is also somewhere I cannot disturb him too much whatever I do during the day because he might be sleeping now and then.

I am sharing this with you so you can apply it with your pet to ensure that he gets proper sleep.

When do guinea pigs sleep?

As we have discussed earlier, guinea pigs have no fixed sleep schedule. Much more, they often sleep in short intervals. They are also sensitive to movements and sounds when they sleep. Make sure you provide a temperature a bit higher than 75 Fahrenheit, this is best for the health of your pet.

You have to ensure that they can sleep comfortably anytime they want, without anyone or anything disturbing them.