Why does my cat attack me and no one else? As you know, cats can be weird, but attacks aren’t normal. If your kitty’s attacks are drawing blood or hurt seriously, you have to do something. This behavior can be due to territorial aggression, overstimulation, and inappropriate petting. Some cats will also attack their owners when they want to play or if they pick up the scent of another cat. But instead of punishing your feline, you should address the following:

Why cats attack their owners

If your cat attacks you while trying to pet it, consider it a warning. It’s your cat’s way of saying that he wants to be left alone. This can happen even to the friendliest kitties. Like humans, your pet needs some space and time alone after a tiring day of playing and cuddling.

Take note that cats like to be petted on their own terms. If you disturb them during their resting time, don’t be surprised if you will receive a scratchy attack in return.

It’s a matter of understanding your cat’s personality and habits. From there, you can prevent being attacked. Also, you should understand that not all cats like pets all the time.

Even if your cat loves petting, it can still attack you in the middle of it. It’s your cat’s way of saying, “stop, I’ve had enough!” Since our cats can’t talk, they express their frustration through meowing or getting physical. Unfortunately, it includes attacking and scratching your skin.

Aside from physical petting, overstimulation can also occur if your cat is exposed to a loud sound for too long.

When overstimulated, the kitty’s pupils will dilate, its tail will lash, and it will also growl. You will even notice flattened ears and a crouched posture.

To deal with cat overstimulation, it’s best to keep a distance from your pet. You should also remove anything that’s causing the stimulation overload. And as much as possible, try not to touch your cat because it may attack you.

My kitten Watson attacks me from time to time, and no one else in the house. We discovered that he does this whenever he wants to play. This is a case of rough play that happens to all cats, especially kittens.

Some cat breeds are more likely to play rough than others. Nevertheless, it can happen to other breeds if the cat isn’t given mental and physical stimulation. The excess energy will be vented into what looks like a physical attack towards their owners.

Cats display two different types of play behavior: social play and solitary play. With solitary play, your cat attacks toys and other objects. Meanwhile, social play is when the feline directs its rough play toward humans.

If you’re someone who bonds more with your cat, rough play isn’t surprising. It’s a sign that your cat has become too comfortable in your presence. You must correct this behavior as early as possible, even if your cat attacks only you and no one else.

Cats are territorial beings. Male cats will often figure in catfights to defend their territory. My friend’s Bombay cat always does this whenever another cat tries to reclaim his ground.

Territorial aggression is a long-standing issue among cats and dogs. Whenever a cat perceives the slightest hint that his territory is under threat, it will be in full defense mode. It may occur if you suddenly go near your cat’s bed or if you retrieve the kitty’s favorite toy.

Your cat may regard you as a threat, which will result in attacking, pouncing, and scratching. It’s best to back off the moment your cat shows signs of aggression.

If you pet or hugged another cat before going home, be prepared for a cat attack. Cats are very particular with the smell of their owners. It’s your ID that separates you from other people even if you change clothes or look.

Your cat will perceive the smell of the stranger feline as a threat to its territory. Your cat will hiss, bare its teeth, and launch into you. Most of the time, this behavior will subside once you took a good bath and restored your natural smell.

This same reaction may occur if you contracted the smell of other animals, not just cats. The attack can also be due to odors that your cat associated with something negative. It could be the perfume of their previous owners who hurt them or the scent of the shelter where they were surrendered.

Lastly, your cat may attack you, and no one else out of fear. Take note that fear is the root of all aggression, be it in cats, dogs, or humans. Fear will push your cat to do things that aren’t typical to its normal behavior.

Some cats will hide when afraid while others will fight back. This is due to the fight or flight response, which varies per cat.

Instead of punishing your cat, you should try to identify what’s frightening it. Also, try to bring the cat to a quieter room to help it calm down.

Why does my cat bite me unprovoked?

An unprovoked bite from a cat can be a sign of affection. This ‘love bite’ shouldn’t draw blood. But if the bite is more aggressive in nature, the six reasons I discussed above are possible culprits.

If you have kittens, teething might be at play. This process is uncomfortable for kittens, and the only way to soothe their gums is to bite on soft surfaces – including your skin.

Take note that biting isn’t acceptable and must be corrected as soon as possible. Tolerating this will only cause behavioral problems that will be difficult to correct later on.

Why does my cat attack me at night?

Cats are nocturnal beings, so they are more active at night. Nighttime attacking isn’t typical behavior, but there can be potential explanations.

Hunger is the main reason cats may seem to attack or awaken their owners in the middle of the night.

If you’re letting your cat sleep on your bed, you probably pinned it down with your leg. And since the cat is hurt, its knee-jerk response is to attack whatever’s causing the feeling.

While it’s rare, a nighttime attack might be your cat’s way of initiating playtime, even if you’re sound asleep.

Why does my cat attack my ankles?

Is your cat a literal ankle-biter? It could be due to the feline’s prey drive. Cats are attracted to moving objects that they can pounce within eye level. Unfortunately, your ankles are the most convenient option at home.

This is a form of aggressive or rough play. Like any form of aggression, this behavior must be corrected right away. You shouldn’t offer your skin to your cat as a plaything since it will only fuel further behavioral problems.

Why does my cat attack me and no one else? This behavior can be due to a lot of things. It can be as simple as rough play or more serious like territorial aggression or overstimulation. Whatever the reason is, you should take action to correct the behavior. This will prevent your cat from attacking someone else in the future. 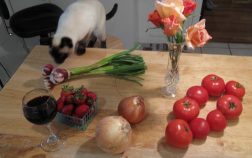 Onions have a high toxicity rate to felines. But how much onion will hurt a cat? Well, one gram for every five pounds of … Read More 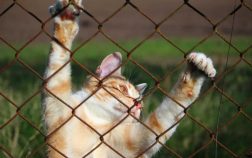 Cats are climbers and jumpers, so keeping them inside the fence can be a tiring task. Knowing how to keep cat from jumping fence … Read More 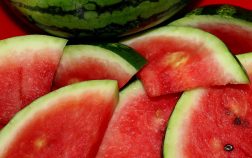 The sight of cats eating watermelon may look cute, but have you ever wondered if it’s safe for your kitty? The good news is … Read More