Dogs make a lot of noises to convey what they feel. But why does my dog snort like a pig? Snorting is reverse sneezing, which is mainly caused by an irritation in the laryngeal area. This irritation will cause a spasm on the pharynx muscles. It will appear as if your dog is gasping in the nose.

Other triggers can also cause snorting, which I discussed below:

Snorting isn’t normal behavior. It usually indicates a problem with your dog’s nasal tract. Your pooch might have sniffed a strong perfume or other cosmetic products. Other irritants like smoke, pollen, and dust can also trigger the same reaction.

When these irritants enter the nose, it will cause a spasm on the soft palate and the throat muscles. As your dog inhales the air while reverse sneezing, it will cause a sound as if your pooch is snorting like a pig.

However, if your dog doesn’t stop snorting, it’s best to call the vet. The veterinarian may prescribe an antihistamine to ease the irritation. If snorting is accompanied by hacking, wheezing, and distress, you should bring the canine to the vet’s clinic for proper diagnosis.

If you’re walking your dog, you should check the tension of the leash. You might be pulling it too much to the point that already chokes your doggo. Take note that you should keep the leash slightly loose to prevent strangling your doggo. This is very important, especially if you have a brachycephalic canine. You should also train your dog to walk on a leash.

Have you ever choked while drinking water and make a snorting sound? This is the same as your dog. Your dog might snort like a pig when it coughs while drinking or eating. Coughing will cause the food or water to backflow to its nose, forcing the pooch to snort.

You should observe your dog after this happens as the fluid that back flowed might cause pneumonia. This is a rare occurrence, but you should not be too complacent.

A foreign matter that got stuck inside your dog’s nose will also trigger the snorting reaction. If you notice a discharge on your dog’s nose and incessant pawing on the affected area, you should perform a quick check. You can use a flashlight to spot any unusual thing inside the nasal opening.

Foreign objects like grass, paper, and food can be the culprit behind this. If the object is far from the nasal opening, it’s best to bring the dog to the vet for proper removal.

Another possible reason why your dog snorts like a pig is an intranasal vaccination. This vaccine is intended to protect your dog against kennel cough. Dogs get this infection by breathing in the virus, so a nasal application is a perfect option.

However, this vaccine comes with some side effects, one of which is snorting like a pig. This is normal and should subside within the day. If the snorting doesn’t stop within 48 hours, it’s best to bring the doggo back to the vet for a check.

Why does my dog snort like a pig when sleeping?

Snorting while sleeping is called inspiratory paroxysmal respiration. This occurs due to the muscle spasms at the back of your dog’s mouth. During a spasm, the tracheal opening will narrow down, which will make it hard for the dog to inhale. As a result, the pooch will snort loudly. Some will be awakened by it.

Brachycephalic dogs like Pugs, Bulldogs, and French Bulldog are more prone to this. It’s due to the dog’s shorter airway that gets blocked easily.

Why does my dog snort like a pig when I pet her?

Petting might be increasing your dog’s respiration, which will trigger irritation in the nasal area. It could be a stuck object, an infection, or dirt. Whatever it is, you should get your pet checked to be sure.

It’s not normal for dogs to snort when being petted. Unlike cats, dogs don’t purr, so there shouldn’t be a reason for them to have noise coming out of their noses.

Why does my dog snort at me?

If your dog snorts every time it gets close to you, there’s something in you that’s causing the irritation. It could be your perfume, the smell of your clothes’ detergent, or what you’re currently eating. Changing these will help stop the snorting.

Some dogs will also snort while playing. This is due to excitement and should not be a cause of concern. Experts call this the ‘play sneezing’, which is typically harmless.

Most of the time, dogs snort like a pig while playing to let you know that they are having a hard time and meant no harm.

However, if your dog starts snorting and stops playing, you should observe its behavior. Any sign of distress should be a red flag that the snorting isn’t just due to excitement.

Aside from that, dogs may snort after exercising. When this happens, let the pooch rest and cool down. You should also give the dog some water.

Can reverse sneezing kill a dog?

Reverse sneezing is very common and unlikely to kill a canine. Still, it will make your dog uncomfortable and anxious during a snorting episode. This is because each snorting fit may last for up to 30 seconds.

Don’t freak out if your dog gags while snorting. Your dog will also stick its tongue after reverse sneezing, so don’t panic. This is a normal reaction because the nose is connected to the throat.

How can I stop my dog from snorting like a pig?

If your dog’s snorting episode is making the pooch anxious, you can do something to ease the reaction. Here’s what I usually do whenever my dog Sherlock starts snorting:

Why does my dog snort like a pig? This harmless reaction is due to a mild irritation on the nasal passage. However, if your dog’s snorting doesn’t stop, you may want to call the vet. Rare cases of reverse sneezing or snorting can be due to foreign objects stuck inside the dogs’ nose. 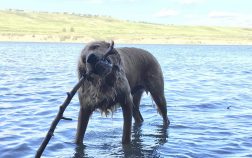 What is the least effective method to retrieve a dog that has got off leash? Running after your dog and yelling its name is … Read More 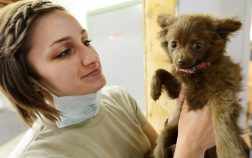 Pet Cosset may receive some form of compensation from the links on this page, at no extra charge to you. Learn more. Like humans, the … Read More