Around this age, the baby rabbits are only fed by their mother once or twice each day. Each feeding session would usually take a few minutes.

In case you have seen an alone rabbit, it won’t be ideal for you to move it because it does not always mean they are orphans. Probably, it just started leaving the nest.

But it is recommended by most experts that the baby rabbits have to stay with the doe up until they are about eight weeks of age.

As early as two weeks old, they would start nibbling on rabbit pellets and hay. However, not because they have started eating does not mean that they can already be taken away from the doe.

In the wild, baby rabbits tend to open their eyes in about six up to 10 days. Then, they are weaned in about three weeks.

During this time, they might start exploring the world outside their nest.

But they would go back there when they get sleepy. They would stay there until one or two weeks more.

How Would I Know That A Baby Rabbit Is Ready To Leave The Nest?

When do baby rabbits leave the nest?

You have to look into particular aspects to identify whether a baby rabbit can leave the nest.

In order to be certain, it is important to get the answers to the following questions.

If the baby rabbit’s eyes are already open, it could mean that it is old enough already to leave the nest. But if its eyes are still closed, then probably it is an orphan.

In such a case, you should not handle it by yourself.

It is recommended that you contact the authorities since they know how to properly take care of the orphan.

Typically, baby rabbits can open their eyes between 6 to 10 days after birth.

If the baby rabbits are already chipmunk-sized, they should already be prepared to leave the nest.

#3. Is the fur of the baby rabbits fluffy?

When you see that all the fur of the baby rabbits is present, they are probably already mature enough to go out of the nest.

Although the kittens are born without fur, this will develop completely into a full coat within a week.

If the baby rabbits already can hop, then, of course, they are already capable of leaving the nest where it is and start exploring the world outside that nest.

#5. Are the ears of the baby rabbits erect?

Erect ears of baby rabbits would also mean that they can already be left alone by their mothers.

In other words, they can now leave the nest.

Even though people who try to help orphaned rabbits mean well, this could be harmful, unnecessary, and in some cases, illegal.

You shouldn’t interfere with an orphaned baby rabbit if there is no licensed wildlife rehabilitator’s assistance.

Without prompt care from the professionals, only 10 percent of orphaned rabbits or below can survive in a week.

Others think that the mother rabbit will not return or, in some cases, will ignore the baby rabbits if there is a foreign scent on them.

However, This Is Only A Myth!

Even so, it is still not advisable for humans to interact with the kits.

With that being said, you should not get involved with them unless it is extremely important.

How Do Mother Rabbits Take Care Of Their Young?

A lot of pet owners get alarmed because mother rabbits seem unconcerned about their young. They would naturally leave their kits alone for some time.

In such a case, you should not worry because mother rabbits do this instinctively to protect them because their presence might attract the predators into the nest.

Due to instinct, the baby rabbits tend to burrow themselves into the nest so that they won’t be easily seen and, of course, to keep themselves warm.

The doe would normally nurse the baby rabbits one up to two times in a day. One feeding is said to be enough in keeping the kittens going throughout the day.

Unlike cats, mother rabbits do not lay down when they are feeding their offspring. They would rather do this while standing over.

With that being said, the baby rabbits need to reach upward to get their food. Also, mother rabbits would only feed them whenever she thinks that is not dangerous.

Normally, she would do this during the night. Throughout the whole process, the doe is always vigilant of the predators.

In addition to this, newborn rabbits lack an elimination reflex; that is why they need their mother to lick their bottoms and bellies.

This is a common nursing habit that most mammals do with their young.

Mother rabbits would also clean the nest regularly by bringing new nest materials and removing the soiled ones.

Rabbits, just like Eastern cottontails (that are the most common species of rabbits in the United States), would usually construct shallow nests using hay and their fur.

They typically position this in grassy areas, sometimes near the trees or bushes, usually in an open space.

Some of you might be shocked that rabbits are building the nests in an open location.

For instance, it is not unusual for pet rabbits to build it in the middle of your yard. They intentionally position it there to avoid potential predators.

That is because most predators would be afraid to venture out searching for prey in such areas, particularly in the middle of the yard.

However, even if this will keep the rabbits safe against predators’ threat, they might be exposed to human activities.

Since the nests are very small, it would be inevitable that someone might step on them.

In case, you can place them in a spacey playpen for rabbits to be safe; and for you to be secured that they’re in the right place (not just anywhere).

When do baby rabbits leave the nest?

The kits leave the nest when they are about three to five weeks old. This can be determined by several factors, such as their motor abilities, size, ear positioning, and the fullness of their fur.

You also have to look out whether their eyes are open or not.

Now that you are aware of these factors, you will make better decisions whenever you find a baby rabbit, both when it is in or out of the nest.

More importantly, it is important to know the properties of orphaned rabbits compared to those that are not so that you will not interfere with them. 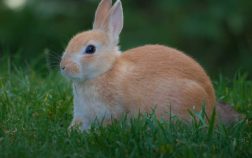 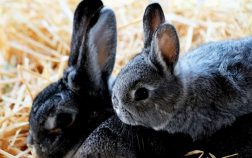 Can rabbits eat cardboard for their meal? This question may sound strange, but you read it right. Cardboard, although unconventional and not a typical … Read More 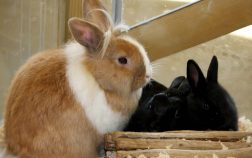 Can rabbits eat cheerios? Yes, rabbits can eat just anything that is given to them, and that includes Cheerios. Allowing them to have this … Read More